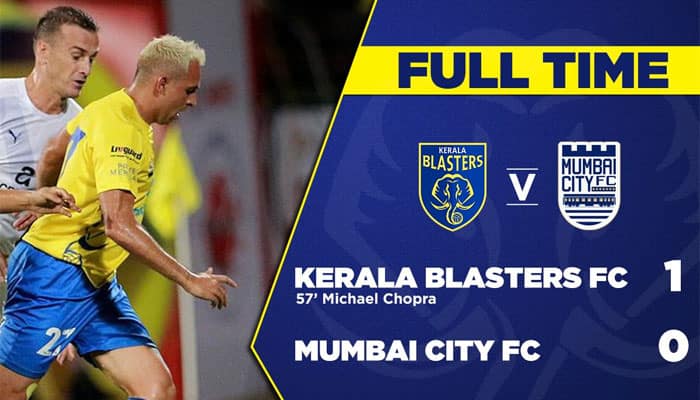 Chopra scored in the 58th minute, curiously Kerala's first in this edition as the inaugural ISL year finalists finally managed to get their campaign back on track and hand Mumbai City FC their first defeat after four matches.

Kerala Blasters manager Steve Coppell did not disappoint with his selection of players, opting for an ultra-attacking line-up. The hosts showed their intent from the minute go, as they attacked Mumbai's territory four times in the first 9 minutes. Striker Mohammad Rafi, who was among the goals last season, was handed his first start and the local lad dived straightway into the action.

In the first minute itself, Kervens Belfort charged down the left flank and essayed a good ball inside the danger zone where Rafi put his height to good use but his header went straight into the hands of the goalkeeper Roberto Netto.

A minute later, Rafi again found space for himself on the right flank but instead of passing the ball to an unmarked Chopra, he went for glory himself, ending up with an embarrassing shot that sailed wide.

There was another chance for Rafi inside the first six minutes when he was through from a long ball but the Mumbai goalkeeper got to the ball before Rafi could do any damage with his third chance of the game.

Mumbai City FC were surprisingly subdued and could never really enforce themselves. There were hardly any chances for the visitors and they should be considering themselves lucky for heading into the breather with a clean slate.

It was Chopra who got closest to breaking the deadlock in the 45th minute when his low grounder after a superb long ball from Josue Prieto was kept away by the fingertips of Netto. In added time, Kerala went close for another time, this time Rafi's header missing the target by a whisker.

Kerala Blasters finally got the goal in the 58th minute with Chopra breaking his duck in the Hero ISL. It was Belfort who tried his luck at goal but the ball deflected and fell for Chopra. The former Newcastle striker thanked his stars and a static Mumbai defence as he worked the ball past the goalkeeper to score Kerala's first goal in this edition.

Mumbai City were clearly second best on the night, yet they could have escaped with a point. Substitute Sony Norde danced his way inside the danger zone from the left and took a shot at goal. The ball seemed headed for goal with keeper Sandip Nandy beaten but Kerala marquee Aaron Hughes jumped to his team's rescue and effected a timely clearance.