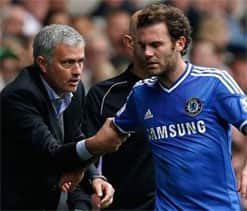 London: Finally, Juan Mata would be leaving Stamford Bridge. According to reports, Chelsea have finally agreed to a club-record £37m transfer to rivals, Manchester United. Ever since the Special boss, Jose Mourinho arrived from Spain last summer, the Spaniard midfielder has been reduced to a side-show.

Despite Mata`s impressive record with Chelsea, where he was named club`s Player of the Year for the last two years, Mourinho considered it wise, for technical or whatever reason, not to utilise the midfielder. And the story of former Valencia player`s intention to leave club started doing the rounds. Especially considering 2014 as a World Cup year, the 25-year-old would certainly prefer to play, no matter where.

He was a part of hugely successful Spanish team which won both the World Cup in 2010 and European Championship in 2012. So, waiting in the bench thinking when will the Special One will change his scheme of things was certainly not in the Spaniard`s plan.

At the time of filing the news, it is however still not clear when will Mata get to appear for the mandatory medical at Old Trafford. Despite agreeing to the transfer, Chelsea are delaying the Spaniard`s departure until they completed their own signing of Mohamed Salah from Swiss outfit, FC Basel.

The 21-year-old Egyptian winger has agreed a £11m deal with the Blues despite Liverpool`s constant efforts to sign him from the previous season. Salah is specially famous with Chelsea fans after his exploits in their Champions League meetings, scoring in each of their three confrontations. The exact date of Egyptian poster-boy`s arrival in London is not yet known with his work permission is not done and medical due.

So, Mata`s much desired flight out of London will have to wait for some more time.