Borussia Dortmund coach Juergen Klopp`s surprise announcement he will be leaving at the end of the season after seven years in charge has raised questions about the future of some of the big name players at the club. 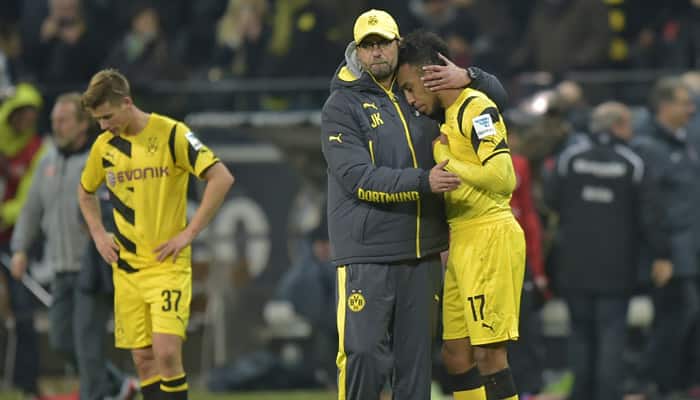 Munich: Borussia Dortmund coach Juergen Klopp`s surprise announcement he will be leaving at the end of the season after seven years in charge has raised questions about the future of some of the big name players at the club.

Klopp, who led Dortmund to two league titles and a German Cup as well as reaching the 2013 Champions League final, was crucial in attracting players to the Ruhr valley club with success all but guaranteed in the past years.

But Wednesday`s shock announcement leaves Dortmund without their biggest personality and the future of midfielder Ilkay Guendogan and captain Mats Hummels, among others, in doubt.

Klopp said Dortmund needed to change but it could now be a case of forced change.

Germany international Guendogan, who returned recently after more than a year out injured, has yet to renew his contract running to 2016, and Klopp`s departure will certainly not boost the chances of him signing an extension.

Club bosses sounded confident in the past months he would sign but radio silence on this issue in recent weeks could suggest otherwise.

Hummels, long courted by Europe`s biggest clubs, recently confirmed his interest in playing abroad at some point in his career. Barcelona and Manchester united are among the clubs reportedly interested in the player.

Hummels said only weeks ago he had discussed the outlook of the team with Dortmund bosses to get "an overall picture".

"But I have not yet taken a decision about my future," said the 26-year-old, adding he would let everyone know once he had decided.

"I am not a fan of those who in the foreground talk about staying and then secretly have already written the issue off."

Klopp`s departure will no doubt strengthen the role of Hummels in the squad, giving him more leadership responsibilities, especially with veteran Sebastian Kehl retiring at the end of the season.

But it could equally be the trigger that sees the central defender leave for a bigger European outfit.

Former Mainz 05`s Thomas Tuchel, linked to every major coaching position in the Bundesliga for months, is seen as a likely successor to Klopp.

But until an appointment is announced, speculation about the future of Dortmund players will remain.

With Dortmund failing to keep big names such as Mario Goetze and Robert Lewandowski in the past seasons when the team was winning trophies, it would not be a surprise if more club stalwarts are headed for the exit now that Klopp was leaving.