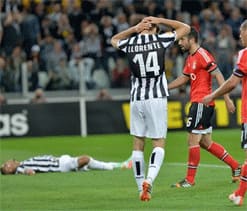 New Delhi: Italian football`s drought in winning Europe`s major tournaments continued, as Juventus failed to break a gritty Benfica defence in the semi-final of Europa League on Thursday. Antonio Conte`s side drew the match at 0-0 home and bowed out over two legs against Jesus Jorge`s side. The final which is to be held at Juventus stadium in Turin, will see Benfica pitted against Spanish side Sevilla. It was the best chance for the Serie A leaders to play at their home ground in front of their fans and end the Italian drought, but the Portuguese outfit thought otherwise.

Both Juventus and Benfica were ousted from the Champions League, Group stages and their entry into Europa gave them a chance to redeem themselves. Just as where Benfica have looked to set that right, Juventus`s European redemption looks for further delay.

The prospect wasn`t was just a home final, it was a chance to bring Italy back amongst European powerhouse. The winner of the Europa plays the winner of the Champions League in the UEFA Super Cup and it is one platform, Juve wouldn`t want to miss. Italian football has missed the fervour in Europe`s major showdowns and it suffered another blip on Thursday. Spanish, German and English teams have enjoyed more success over the past few years. For Italy it dates back to 2010 when Inter Milan won the Champions League.

Italian football is in a transition and its here where Conte has churned out a team that have done wonders domestically. But in Europe he has failed. On the other hand, Benfica who recently lifted the domestic title in Portugal looked the better team over Juve in the two-legged tie. Benfica have done enough so far in getting salvation after losing last year`s final against Chelsea. They will look to cross the hurdle this time against Sevilla.

Europa League has been a happy hunting ground for Portuguese clubs. FC Porto won the title twice in the past five years and Benfica are playing their second successive final. Where the Portuguese have seemed to enter the European foray, Italian teams will have to wait more longer to enjoy success in Europe.

Champions League: Beat Barcelona and then win the title?