Juventus and Barcelona have arrived in Berlin ahead of Saturday`s Champions League final with both teams bidding to cap remarkable seasons by being crowned champions of Europe. 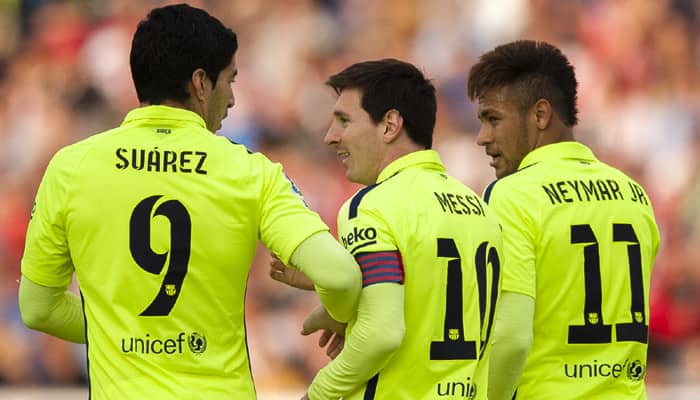 Berlin: Juventus and Barcelona arrived in Berlin ahead of Saturday`s Champions League final to be greeted by scores of eager fans with both teams bidding to complete a treble of titles.

The European heavyweights square off at Berlin`s Olympic Stadium bidding to add the continental crown having already won their respective domestic league and cup titles.

Barcelona, decked out in blue shirts and jeans, headed to their hotel on Potsdamer Platz before Friday evening`s training and press conference, with coach Luis Enrique and stars Neymar and Gerard Pique at the Olympic Stadium.

Berlin`s iconic Brandenburg Gate will be lit up on Friday in Barcelona colours to honour the Catalan giants.

Their star-studded attack of Lionel Messi, Luis Suarez and Neymar has scored 120 goals between them this season and the Spanish giants are bidding to repeat their 2009 feat of winning the treble.

Around 1,000 fans waited outside Barca`s hotel with some keeping the security guards busy by clambering onto the roof to get a glimpse of their heroes, especially Messi who is bidding to win a fourth European final.

There were several Argentine flags in the crowd with Messi poised to become the first player to score in three Champions League finals.

A fourth title would see him equal Clarence Seedorf`s record of winning the trophy four times, but the Dutchman is the only player to have done it with three different clubs - Ajax, Real Madrid and AC Milan, with whom he won it twice.

Their 37-year-old veteran goalkeeper Gianluigi Buffon waved to the crowd as he targets a first winners medal in his 12th Champions League campaign.

Juventus are planning to ruin Barcelona`s party plans in Berlin by toppling the favourites, even if that means keeping Messi quiet.

"He`s an alien. All you can do is to applaud," said Juve defender Leonardo Bonucci when asked about Barca`s midfield maestro.

Powerhouses Argentina out of U-20 World Cup