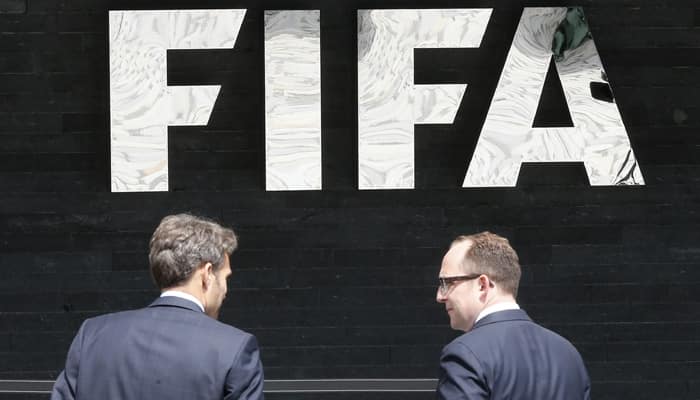 The companies that will pay hundreds of millions of dollar for the right to place their ads around Cup venues in Russia in 2018 said they expect ethical behavior and transparency from FIFA, after seven football officials were arrested in Zurich by Swiss police at US request.

But none of the sponsors, whose funding is essential to FIFA but whose marketing efforts risk being undermined by the cloud from the latest football scandal, went so far as to withdraw its sponsorship of the sport.

"We expect all of our partners to maintain strong ethical standards and operate with transparency," said Budweiser, the US beer unit of Belgian brewing giant AB InBev.

McDonald`s, the fast food giant, called the news of the arrests and 14 indictments of football officials and sports markets by the US Justice Department "extremely concerning."

"McDonald`s takes matters of ethics and corruption very seriously," the company said in an emailed statement.

"We are in contact with FIFA on this matter. We will continue to monitor the situation very closely."

Adidas, the German sportswear group, said it would encourage football`s global governing body "to establish and follow transparent compliance standards in everything they do."

"The Adidas Group is fully committed to creating a culture that promotes the highest standards of ethics and compliance, and we expect the same from our partners."

However, it added, "Adidas is the world`s leading football brand and we will continue to support football on all levels."

None of the major football sponsors were themselves implicated in the scandal, in which FIFA officials were accused of accepting bribes for sponsorship and other deals.

Adidas, along with Coca-Cola, Hyundai and Kia Motors, Visa, and Russian energy giant Gazprom are official FIFA Partners, the companies with the closest marketing relationships to the body. Budweiser and McDonald`s are sponsors of the 2018 World Cup.

Gazprom spokesman Sergey Kupriyanov declined to comment on the scandal, telling AFP that "There is no concrete accusation against us."

Sepp Blatter promises to root out any wrongdoing in football