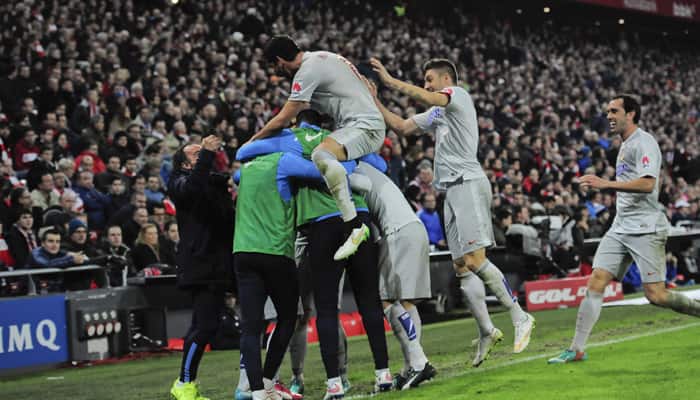 The Spanish champions looked on course for back-to-back league defeats for the first time since April 2012 when Mikel Rico gave Athletic a deserved half-time lead.

But Griezmann levelled straight from the kick-off at the start of the second period and completed his hat-trick after Raul Garcia had put the visitors ahead from the penalty spot.

Victory moves Atletico back to within three points of Barcelona, who were 5-0 winners over Cordoba on Saturday, in second.

However, Real have a game in hand on their two main title rivals as they won their fourth trophy of the year in the Club World Cup final against Argentine side San Lorenzo in Morocco on Saturday.

At the new San Mames both sides were missing a number of key players with Aymeric Laporte and Ander Iturraspe banned for the hosts, while Atletico were without the suspended duo of Koke and Mario Mandzukic, as well as Miranda through injury.

It was the Basque outfit who settled much quicker, and went ahead after 17 minutes when Markel Susaeta`s free-kick was expertly nodded into the far corner by the unmarked Rico.

Atletico failed to create anything of note in the opening 45 minutes, and could have been even further behind at the break had Aritz Aduriz decided to shoot when he was released clear on goal by Susaeta rather than trying to turn inside before being crowded out.

However, the champions emerged a different side after an inspired half-time pep talk from Diego Simeone and equalised straight from the kick-off as former Real Sociedad winger Griezmann came back to haunt his old Basque rivals once more with a precise header from Juanfran`s cross.

Seven minutes later Atletico completed the comeback in controversial circumstances as the referee pointed to the spot when Tiago hit the floor under minimal contact between he and Mikel San Jose inside the area.

Once the protests from the home fans and players had finally subsided, Garcia kept his cool to send Gorka Iraizoz the wrong way from the spot.

If Ernesto Valverde`s men felt hard done by at the penalty decision, they were handed a reprieve 22 minutes from time when Iker Muniain was extremely fortunate to escape with just a yellow card after a reckless studs high challenge into the knee of defender Jose Gimenez.

That decision wasn`t to prove too contentious, though, as Atletico wrapped up the points five minutes later when Griezmann pounced on a slip by Carlos Gurpegi to calmly stroke the ball past Iraizoz.

The Frenchman sealed his first Atletico hat-trick nine minutes from the end thanks to more generous officiating as he tapped into an empty net despite clearly being in an offside position after the ball ricocheted off Garcia.

Elsewhere, Villarreal and Malaga remained in the hunt for the top four with victories over Deportivo la Coruna and Elche respectively.

It was a more comfortable afternoon for Villarreal at home to Depor as they recorded a seventh straight win in all competitions 3-0 thanks to Jonathan dos Santos`s first goal for the club and two second-half strikes by the in-form Luciano Vietto.

Malaga, meanwhile, had to come from behind to record a third consecutive league win after falling behind to David Lomban`s header on the verge of half-time.

However, second-half goals from Ignacio Camacho and on-loan Liverpool midfielder Luis Alberto mean they join Villarreal and Sevilla on 30 points, just one off Valencia in fourth.