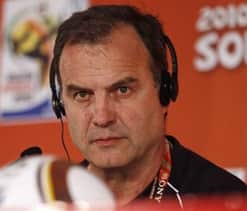 Marseille: Slumping French giants Marseille announced Monday that they have reached "an agreement in principle" with Marcelo Bielsa to take over as coach.

The 58-year-old Argentine, who has coached Chile and Athletic Bilbao, has long been the longtime favourite to succeed caretaker boss Jose Anigo.

"There is an agreement in principle with Bielsa," said Marseille president Vincent Labrune after Sunday`s 0-0 draw with Lille.

"The agreement will be submitted to the contracts department but we can state that we are relatively confident that things will be finalised in the coming days."

Anigo took charge of the Marseille first team in December following the sacking of Elie Baup but will return at the season`s end to his primary role of sporting director.

He had been involved in the search for a new coach and Bielsa, whose last job was in charge of Athletic Bilbao, was the frontrunner having spent the last two weeks in France studying his prospective new employers.

"I think he`s a good coach, everyone knows that, and he has the right charisma for a club like ours," said Anigo last week.

"He has spent a lot of time here and has seen the structures of the club."

Bielsa, 58, made his name as a coach at Newell`s Old Boys in his homeland and went on to coach Argentina before leading Chile at the 2010 World Cup.

He left Athletic at the end of last season after two seasons with the Basque club.

Marseille are sixth in Ligue 1 and look destined to miss out on European football next season.