On-loan Chelsea forward Mohamed Salah came off the bench to hit his third goal in four league games as nine-man Fiorentina ended Inter Milan`s three-game winning run with a 1-0 success at the San Siro on Sunday. 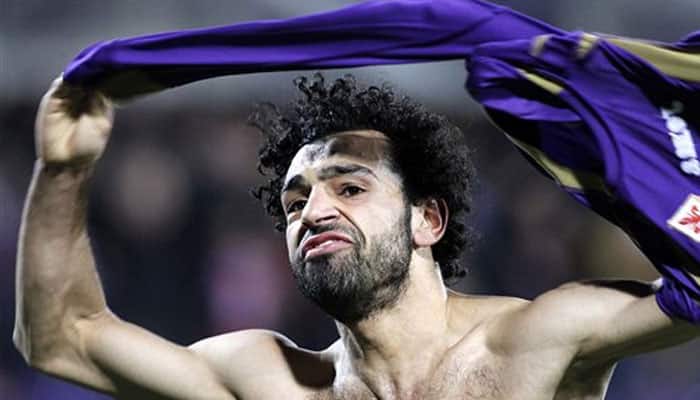 Fiorentina were unbeaten in 11 competitive matches and travelled to Milan in confident mood having knocked Tottenham out of the Europa League on Thursday when Salah scored in a 2-0 win in Florence.

And La Viola, forced to finish the game with nine men when Nenad Tomovic and Stefan Savic limped off, extended their run to move to within three points of third-placed Napoli.

Vincenzo Montella`s men were missing several regulars with Mario Gomez, Mati Fernandez and goalkeeper Ciprian Tatarusanu sidelined and midfielder Borja Valero only fit enough for a spot on the bench.

But La Viola overcame that setback with a battling performance that was settled by Salah`s 55th minute strike.

Inter goalkeeper Samir Handanovic was kept busy in the opening stages when he palmed away an Alessandro Diamanti free kick, while Khouma Babacar narrowly missed making contact with Manuel Pasqual`s delivery close in.

Montella was forced to replace Babacar with Salah just before half-time after the Senegalese limped off, but the match turned in the visitors` favour.

Handanovic was at fault for pushing Pasqual`s cross into the path of Salah and the Egyptian did not miss the net from ten yards out.

Inter had claims for a penalty waved away after Chelsea target Mauro Icardi fell under a challenge from Savic as he hesitated on a great long ball from midfield only yards from goal.

And the Argentinian striker was lamenting another missed chance when he leaned too far back on Xherdan Shaqiri`s perfect pass in the area and skied over the crossbar.

Mancini replaced a mediocre Mateo Kovacic with Rodrigo Palacio, but it was Nemanja Vidic who next threatened for the hosts.

The Serbian rose to meet Shaqiri`s powerfully-driven free kick from the right but Neto got down smartly to smother at his near post, and Vidic saw a glancing header fly wide minutes later.

Fiorentina had used all three substitutes by the 81st minute when Alberto Aquilani made way for Juan Vargas and only a minute later the visitors were reduced to 10 men when Tomovic suffered a knock following a challenge and was forced off.

Palacio did well to round his man on the counter but with Icardi free to his left, the Argentinian opted for a near-post shot which Neto did well to collect.

Fiorentina had to tighten up further at the back when central defender Savic was forced off with a muscle problem three minutes from time, leaving the visitors down to nine.

With six minutes of added-on time, Mancini`s men had time to level but Neto had other ideas. When Shaqiri whipped in a cross from the corner of the area, the keeper performed acrobatics to palm Palacio`s powerful header to safety.