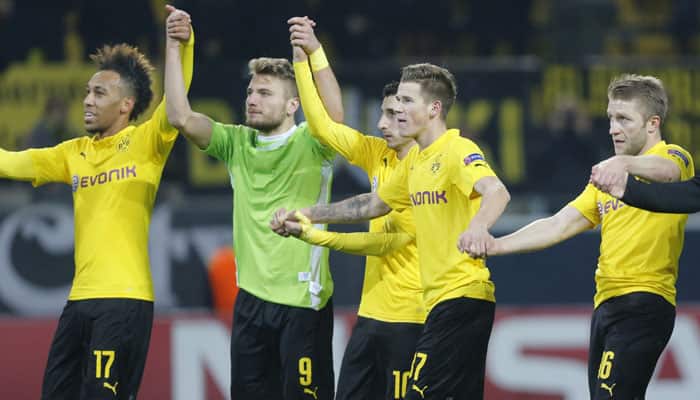 Dortmund earned some relief from their domestic woes on Tuesday as they qualified for the knockout stages of the Champions League as group winners -- but their 1-1 draw against Anderlecht told of a side still down on confidence and form.

Ciro Immobile`s splendid 58th-minute goal had looked as if it would be enough to give the already qualified Germans, who had only climbed off the foot of the Bundesliga at the weekend, a victorious finale in Group D.

Yet Anderlecht, lively and with nothing to lose as they had already been eliminated, were finally rewarded for the threat they had offered at a nervous Westfalenstadion all evening when Serbian Aleksandar Mitrovic headed a thumping 84th-minute equaliser.

It left Dortmund facing a nervous few last minutes, knowing that with Arsenal winning 4-1 at Galatasaray, another goal from the Belgians would deprive them of the advantage of finishing in top spot, but they were well worth their morale-boosting win.

Dortmund began the game safe in the knowledge that unless Arsenal went goal crazy at Galatasaray, a draw would almost certainly suffice for top spot.

Yet Anderlecht, with only Europa League football to look forward to, were in the mood to make life difficult, particularly their inspired goalkeeper Silvio Proto who made a string of superb saves before and after Immobile`s goal.

His heroics, as Dortmund enjoyed the lion`s share of possession and territory, ensured there were plenty of nerves among the home fans as Proto twice denied Immobile and both Mitrovic and Sacha Kljestan went close.

The Italian Immobile may have had a hard time convincing the Dortmund faithful that he is an adequate replacement for their beloved Robert Lewandowski but they were hugely thankful for his superb strike as news that Arsenal were 3-0 up filtered through.

The ball was neatly slipped through to him by Nuri Sahin on the edge of the area and the Italian international expertly nudged it to his right to evade challenges before firing home unstoppably.

Still, Anderlecht were not finished, with a tremendous surge and cross from Anthony Vanden Borre on the right wing being finished by the exciting Serb Mitrovic`s point-blank header.