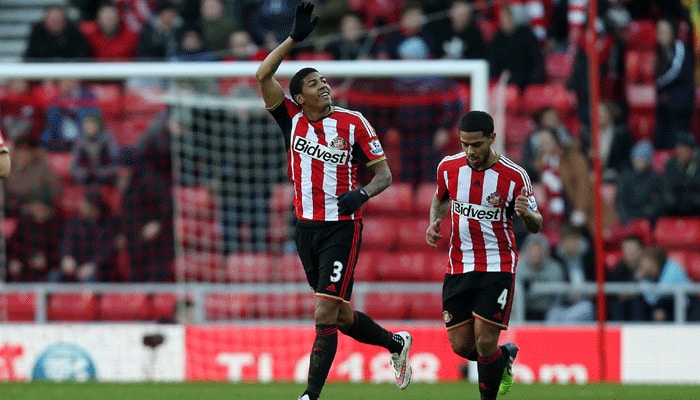 Patrick van Aanholt scored the only goal as Sunderland beat Leeds United 1-0 on Sunday in a repeat of their celebrated FA Cup final victory 42 years ago.

The Dutch left-back ended a near year-long wait for a goal to secure the Premier League side`s passage to the fourth round at the expense of the Championship strugglers.

It is now six games without a win for Neil Redfearn`s Leeds, who looked capable of cancelling out Van Aanholt`s 33rd-minute winner in a bright opening to the second half, but failed to take any of the several chances they created after the break.

Sunderland made six changes from the side beaten 3-2 in the Premier League by Manchester City less than 72 hours earlier, in the clubs` first FA Cup meeting since the Wearsiders stunned the then holders and hot favourites with a single-goal victory in the 1973 Wembley final.

They took a deserved first-half lead with a goal that arrived at an almost identical juncture to the late Ian Porterfield`s winning effort more than four decades previously.

In his first game after a two-month absence following surgery on a dislocated shoulder, the speedy 24-year-old ran onto an inviting lay-off from Fletcher to find the bottom corner with a powerful angled drive.

Leeds, who have not reached the final since 1973, beat Manchester United as a third-tier side at this stage five years ago.But the Championship side started sluggishly and rarely looked like causing an upset for their 5,200 travelling fans until upping their game after the interval.

Sunderland`s 1973 victory was notable for a stunning double save by Jimmy Montgomery to deny Trevor Cherry and Peter Lorimer, but present-day goalkeeper Costel Pantlimon was not required to produce such heroics.

The Romanian was, however, called into action twice in a short passage of play early in the second half, keeping out shots from Adryan and Brian Montenegro.

As Leeds pressed, Sunderland midfielder Sebastian Larsson`s foul on Charlie Taylor was adjudged to have occurred marginally outside the area by referee Mike Dean in a desperately close call.

Sunderland eventually reasserted themselves and Silvestri did well to save from Giaccherini and Fletcher as the hosts pressed for a decisive second goal.

The hard-working Fletcher could have helped himself to a hat-trick, and pulled a decent chance across the face of goal to leave the result in doubt until the final whistle.

Despite exerting an increasing influence on the encounter in a much-improved second-half display, Leeds failed to create any clear chances until the final minute.

With full-time beckoning, a golden opportunity went begging as defender Liam Cooper`s header struck the post from a Luke Murphy cross, as history repeated itself from that spring day back in 1973.