Juventus star Paul Pogba underlined the challenges still facing the Italian giants in Europe despite his maiden Champions League goal securing a crucial 3-2 win over Olympiakos in Turin on Tuesday. 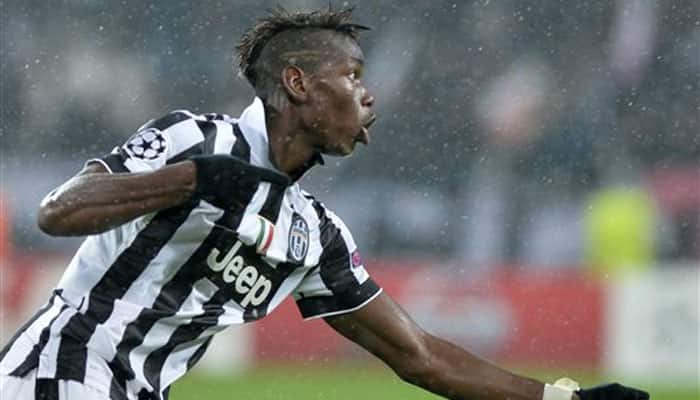 Pogba`s second-half strike wrapped up the points for Massimiliano Allegri`s side to hoist the Italians up to second in Group A ahead of the Greek champions.

Juve and Olympiakos trail Atletico Madrid by three points, and both will be playing for their survival in the competition in their final two games.

Pogba, who became the highest-paid player in crisis-hit Serie A last week when he extended his contract with the Bianconeri until 2019, struck in the 66th minute of an entertaining match on a rainy night in Turin.

Juve could have won 4-2 but Olympiakos `keeper Roberto, the hero when the Greeks beat Juve 1-0 in Athens two weeks ago, blocked Arturo Vidal`s injury-time penalty.

Although Olympiakos came to defend and played on the counter for most of the night, Juve survived several scares against Michel`s enterprising visitors.

Pogba, who tasted the pain of failing to get past the group stage with Juve last year having reached the quarter-finals in 2013 under former coach Antonio Conte, picked the perfect time to hit his maiden goal in the competition on what was his 100th Juve appearance.

But he said: "Sometimes we get a bit complacent. You can`t mess about in the Champions League, not even a little bit.

Juventus resume their bid for a place in the last 16 with a trip away to Malmo on November 26 when Atletico host Olympiakos.

A win away to the Swedish champions coupled with an Atletico win in Madrid would boost Juve`s chances ahead of their final group game at home to the Spaniards on December 9, when Olympiakos host Malmo.

Olympiakos coach Michel, however, remained defiant after seeing his side come close to causing an upset in Turin.

"We`re not a big European team but we`ve shown that we are a threat when we travel away from home as well. Juventus is a great club with a great history, so we`re proud of what we did tonight," he said.

"I`m proud of our performance, especially Roberto who once again showed his class. Saving that penalty could prove decisive for us when it comes to qualifying.

"But now we have two game left and we will go to the Vicente Calderon (stadium, in Madrid) looking to play the game we have been playing."

Andrea Pirlo, on his 100th Champions League appearance, broke the deadlock with a trademark free-kick to give Juventus a 21st minute lead.

But the hosts were stunned three minutes later when central defender Alberto Botia beat Gianluigi Buffon with a glancing header from a corner.

Juve needed a win, preferably with a two-goal cushion, to boost their qualification chances and suffered a blow early after the restart when Delvin N`Dinga beat Buffon with a glancing header as Juve failed to clear a free kick.

Four minutes later, Juve were back on level terms, Fernando Llorente`s header ricocheting off Roberto then his post before bobbling over the line for an own-goal.

Juventus restored their lead in more convincing fashion just a minute later. Pogba collected Llorente`s ball from the left and, after failing in his attempt to send Tevez through, he fired in a shot that beat Roberto down low.

Tevez saw an angled strike saved by Roberto two minutes from time, but after winning a penalty when he was felled in the box Vidal saw his spot-kick saved by the giant `keeper.

"It`s a shame we missed the penalty, it would have rounded off a good night for us," Juve coach Massimiliano Allegri told reporters.

But the former Milan coach admitted Juve`s glass was more half-full than half-empty.

"Tonight the crucial thing was to get the win, so we have to be positive.

"We still have two games to secure our qualification."

FBI used US soccer chief to spy on FIFA: Report