Giant-killers Bradford City`s progress in the FA Cup was suspended at the quarter-final stage on Saturday after they were held to a 0-0 draw by Championship side Reading. 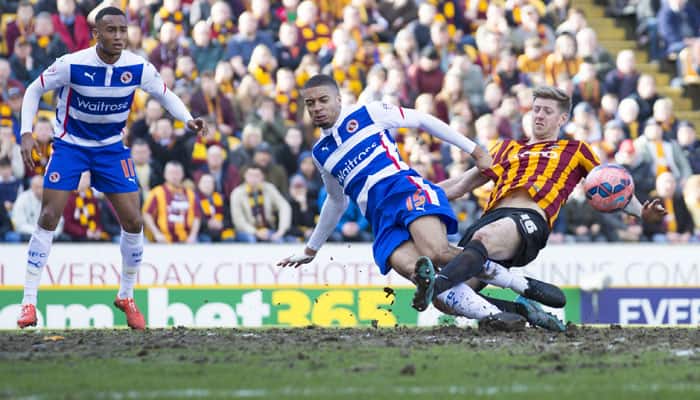 London: Giant-killers Bradford City`s progress in the FA Cup was suspended at the quarter-final stage on Saturday after they were held to a 0-0 draw by Championship side Reading.

Third-tier Bradford memorably came from 2-0 down to win 4-2 at Chelsea in the fourth round before eliminating Sunderland in round five, but they were taken to a replay by Reading on a muddy Valley Parade pitch.

Bradford manager Phil Parkinson, who spent 11 years at Reading as a player, told BT Sport: "We have to give Reading credit. They came here and made it very difficult with the extra man in midfield, but I thought our lads did excellent.

"They were very professional and made sure we stayed in the game. I thought we got a bit of momentum in the second half and were the team in the ascendancy. We look forward to the replay."

Bradford, beaten League Cup finalists in 2013, are attempting to reach the semi-finals for the first time since they won the trophy in 1911, while Reading last made the last four in 1927.

An uneven, sun-baked playing surface contributed to a bruising, physical encounter beneath the Yorkshire sunshine, as players from both sides struggled to keep the ball on the ground.

Both teams struck the woodwork in the first half, with Reading striker Pavel Pogrebnyak hitting the left-hand post from Jamie Mackie`s cross before Gary Liddle`s left-wing cross drifted against an upright at the other end.

Bradford enjoyed the best of the second half, but James Hanson could not find the target with a near-post shot and Andrew Davies headed a Filipe Morais free-kick inches over the crossbar.

And Reading, currently 18th in the Championship, almost snatched victory at the death when Pogrebnyak appeared to help a deep free-kick from Oliver Norwood onto the post with his hand.

Aston Villa and West Bromwich Albion face off later on Saturday in a repeat of Tuesday`s Premier League game between the sides, which saw Villa prevail 2-1 courtesy of a stoppage-time penalty by Christian Benteke.

In-form Liverpool host second-tier Blackburn Rovers on Sunday, while holders Arsenal travel to Manchester United in the tie of the round on Monday.