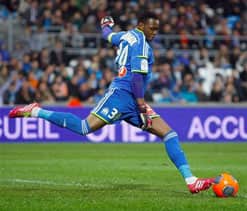 Paris: Marseille`s bid for European football next season received another major blow on Saturday when struggling visitors Rennes inflicted a 1-0 defeat on Jose Anigo`s side at the Velodrome.

Those gaps could well increase with the teams above Marseille enjoying a game in hand.

Saturday`s upset came on the back of last week`s 1-1 draw with Reims and a 1-0 loss to Nice.

It was Marseille`s sixth home loss of the season and Anigo`s out of form team have now gone four games without a win.

It promises to be a long end of season run in for Marseille who were booed off their pitch by unhappy home fans.

"I`m not going to talk at length because you can`t defend the indefensible," stormed Marseille president Vincent Labrune. "Our form at home is catastrophic."

Anigo said: "The players haven`t done their jobs. I`m disappointed because when you wear this shirt you have to put in the work."

Marseille midfielder Mathieu Valbuena acknowledged: "It`s our fault we are in the position where we are today."

For Rennes this was a welcome victory, pushing them up a place to a comforting six points above the relegation zone.

Rennes` goal scorer Doucoure commented: "We knew we could pull off a result here and I`m happy for the team. Now we have to fight till the end."

Nantes beat Montpellier 2-1 for their first win in two months, bottom club Ajaccio edged Valenciennes 3-2, Bastia beat Reims 2-0, and the games between Bordeaux and Nice and Toulouse and Evian ended in 1-1 draws.

On Friday runaway Ligue 1 leaders Paris Saint-Germain kept up the momentum on their title defence with a 1-0 win on Lorient`s artificial pitch, Thiago Motta scoring the winning goal.

Second-placed Monaco host third-placed Lille on Sunday looking to increase the gap between the teams, which sits at nine points, while Saint-Etienne host Sochaux and Lyon in fifth go to Guingamp.