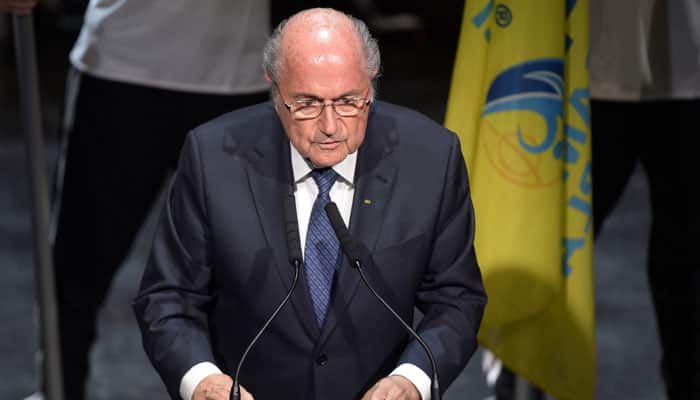 Blatter, who has agreed to resign amid a mounting corruption storm engulfing FIFA and been accused of blocking greater transparency, took a veiled swipe at Europe`s football powers as he welcomed a move toward greater checks.

The 79-year-old FIFA president said he welcomed a proposal by Wolfgang Niersbach, president of the German Football Federation, for an independent integrity inspection on the members of all top FIFA committees.

"In doing so, Niersbach has broached a subject that has so far been blocked by UEFA of all associations," Blatter said in his column for FIFA`s The Weekly magazine.

"Better late than never," he commented.

Confederations must "acknowledge their responsibility in matters of ethics. Only the Asian confederation has an ethics committee like the one introduced by FIFA. All other continental bodies are lacking in this regard," said Blatter.

Niersbach`s call for greater ethics "must apply to everyone," he added.

"Only together can we continue to drive the process of reform forward. That is something I will stand for until my final day in office."

European members of FIFA led the campaign for Blatter to stand down, which he promised to do four days after being reelected last month as pressure from dual corruption investigations mounted.

US authorities are investigating more than $150 million of bribes to top officials while Swiss authorities are looking into the award of the 2018 and 2022 World Cups to Russia and Qatar respectively.

A FIFA executive meeting on July 20 will decide a date for the election of a new leader. Blatter said the special congress would also decide "extensive changes" to the world body`s structure.

"The key is to strengthen democracy within the `FIFA government`," said the FIFA leader.

He said the six regional confederations should be represented on the 25 member executive committee according to the number of country members they have.

The FIFA president said it was "contradictory" that the 54-country Confederation of African Football (CAF) and 46-member Asian Football Confederation (AFC) have the biggest number of country members but only five and four seats respectively.

Eight of the FIFA executive are from UEFA.

"However, I am reluctant to take places away from anyone; there should not be a redistribution of seats on the executive committee but a commensurate expansion of this body."

Africa and Asia are longstanding supporters of Blatter and he has in the past encouraged them to seek more World Cup places as well.

Blatter also said that women must be "appropriately represented" on the FIFA executive.

"World football`s governing body is not a `men-only club`," he commented, although he did not make specific proposals.