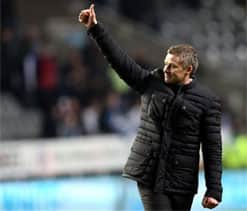 London: As a baby-faced striker Ole Gunnar Solskjaer made his name coming off the bench to score vital goals for Manchester United and his knack of making a dramatic impact appears undiminished.

On Saturday, however, it was his tactical nous rather than his lethal feet which did the trick as the Norwegian marked his first game in charge of Cardiff City with a 2-1 come-from-behind victory in the FA Cup third round at Newcastle United.

His big day looked like being ruined as the Welsh club trailed 1-0 to Papiss Cisse`s 62nd minute goal at St James` Park.

The Norwegian then introduced Craig Noone into the fray and he equalised after 73 minutes before fellow substitute Fraizer Campbell earned Cardiff their first win at Newcastle for 51 years with a header 10 minutes from time.

It was the perfect start to life in British football management for the man who came off the bench to win the Champions League for United in 1999.

It was also a much-needed boost for Cardiff who have slid towards the Premier League relegation zone during a tumultuous few weeks that saw former coach Malky Mackay sacked after falling foul of owner Vincent Tan.

"It`s not about me as such, but it`s a perfect start for the new times," Solskjaer was quoted as saying by the Wales Online website (www.walesonline.co.uk).

"The lads have had a lot to deal with lately and, of course, it`s nice for them to start off with a win in the cup.

"It`s never easy to come up to Newcastle and play especially when you go 1-0 down. There`s not many games that get turned around here. The lads showed great character

Solkskjaer, 40, has already proved himself as a manager, guiding Norwegian club Molde to the first two league titles of their 102-year history.

The English Premier League is a far tougher assignment, however, especially with Cardiff in a relegation dogfight in their first top flight season for more than 50 years.

He has been impressed with what he has seen so far though.

"I have a solid foundation here," said Solskjaer.

"It`s a long season. The hardest and most intense season of any football country. The depth of the squad is something I am looking at, but the quality is there.

"We have lots of quality to work with and there will maybe some additions to blend in."

Forging a good relationship with Malaysian billionaire Tan will be vital for Solskjaer, although it`s unlikely all his requests will be granted in the January transfer window.

"People will see when and if we see things happen," said an upbeat Solskjaer, who scored 126 goals for United.

"I`ve actually been thinking about asking the owner to sign the local lads, Ryan Giggs, Aaron Ramsey and Gareth Bale. I think they might be some signings we could do with!"

Lewandowski to join Bayern from Dortmund at end of current season