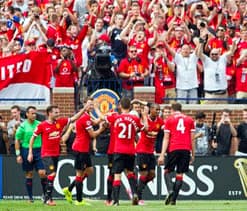 London: The financial disparity between the big clubs and the rest will continue to grow in English soccer despite Financial Fair Play (FFP) rules, according to a report released on Friday.

The study `Focusing on the polarisation of football finances and the impact of FFP` by business advisory and accountancy firm BDO says the gap in wealth between the most successful clubs and others is widening.

The report adds that the new FFP rules brought in by European soccer`s governing body UEFA could inadvertently help to maintain the imbalance.

"The top six or seven clubs in the English Premier League (EPL) will be able to consolidate their superiority with bigger and better global commercial deals," said BDO partner Trevor Birch, former chief executive of Chelsea, Everton and Leeds United.

"The rest of the league then struggles to grow revenues outside the central media deal and faces a perennial relegation battle with the consequent uncertainty that brings for long term planning. FFP is unlikely to change this scenario."

Birch, who was chief executive when Russian billionaire Roman Abramovich bought Chelsea in 2003, fears a two-tier system existing in the future that could further separate the leading teams from clubs in the Championship, League 1 and League 2.

"In the Football League (FL) clubs have historically made large losses as they compete to gain promotion and the introduction of FFP should go some way to assisting clubs reduce these losses and promoting sustainability," he added.

"However, the recent increase in parachute payments to FL clubs relegated from the EPL, which are not included in FFP calculations, may start to have a greater distorting effect on competition in the future and effectively create a two-tier league."

BDO interviewed 67 finance chiefs from clubs in the EPL, FL and Scottish Premiership to discuss the economic challenges in the sport.

The company found that 94 percent of those they spoke to felt the disparity between the bigger and smaller clubs would continue to grow.

BDO also said that teams not in European competition were struggling to secure lucrative sponsorship deals as major backers concentrate their spending on clubs that bring them global coverage.

"That there is a growing gap between the larger and smaller clubs may be of concern if we are to maintain a broad base of high-quality football in the UK in the future," added Birch.

"In the EPL we are seeing the creation of super clubs breaking away from the rest of the league with budgets and expenditure beyond the wildest dreams of the other teams.

"This is being driven by broadcast rights, global brand creation and the deep pockets of the disparate owners of these clubs," said Birch.

The report concludes that the growing gap between clubs will not affect the popularity of the game but in the long term could marginalise certain teams and fans.

The FL season has already begun and the EPL campaign gets underway on Saturday.

Plenty of challenges for Antonio Conte with Italy