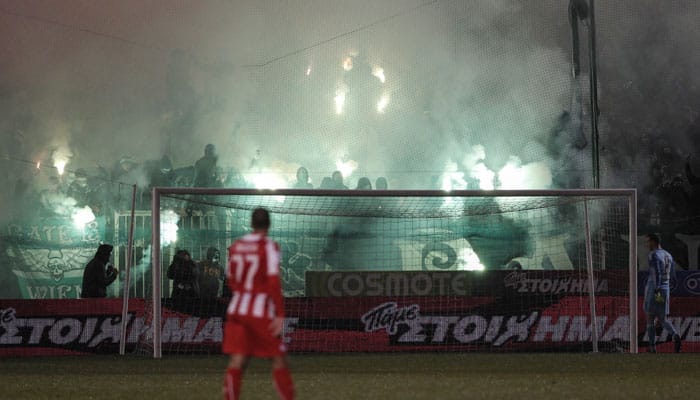 Before the traditionally high-risk encounter kicked off, Olympiakos president Vangelis Marinakis was subjected to a hail of flares, firecrackers and other objects thrown in his direction, although he wasn`t hit.

Just before the start of the second half, a flare hurled by a spectator hit Olympiakos` Swiss midfielder Pajtim Kasami in the shoulder.

That delayed the resumption of play several minutes as the referee waited for calm to return.

At one point a chair was thrown at Olympiakos` Portuguese coach Vítor Pereira, narrowly missing him. A group of some 50 Panathinaikos fans then ran onto the pitch to chase him away.

The supporters only returned to their seats once riot police appeared using tear gas to restore order.

The Athens derby, played at the Apostolos Nikolaidis Stadium and won by hosts Panathiaikos 2-1, is notoriously explosive and is known as "the derby of the eternal enemies".

The win for Panathinaikos left them just three points behind leaders and reigning champions Olympiakos at the top of the table.