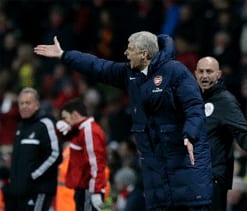 London: Arsenal boss Arsene Wenger has reportedly blamed unidentified medical products for a series of injuries, which his squad has suffered as they chase a top four slot in the Premier League.

Wenger recently disclosed that one possible reason that Arsenal has been losing so many players is that they could be taking lifestyle drugs without the clubs knowledge.

According to the Daily Star, Wenger said that he is surrounded by people who want to enhance their performances because they have another problem in their life although it is not always necessarily a good thing to do.

The Arsenal boss also said that some of the injuries are down to the medication that the players take, which one does not even know about adding that one later realises that they took this medication.

Wenger said that maybe the liver does not work as well because of the medication, as the toxins do not go as quickly out of the body as they should and the players get tired.

Wenger also said that medication always pushes a part of a player`s body and is sometimes detrimental to other parts of the body.

Treatments for hair loss, for example, are legal but they can have damaging side effects for professional sportsmen, the report added