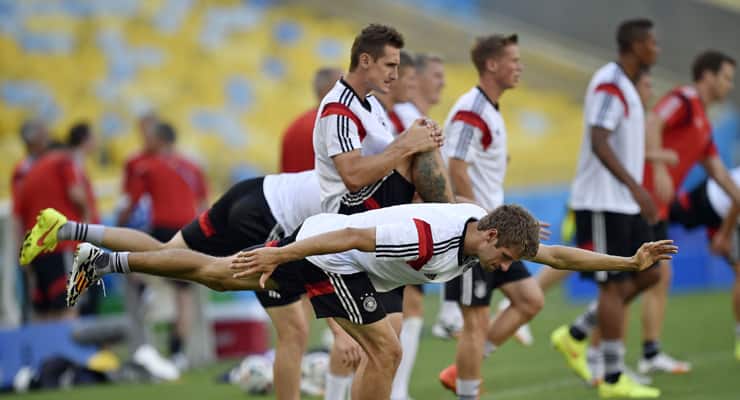 Brasilia: Despite being unbeaten in the World Cup so far, France and Germany both face selection dilemmas ahead of their Friday`s quarterfinal clash here at the Maracana Stadium.

Perhaps the most intriguing is the choice France coach Didier Deschamps has between Olivier Giroud and Antoine Griezmann.

Giroud and Griezmann have alternated places in Deschamps` starting team so far this tournament, with Giroud preferred for Monday`s round of 16 clash with Nigeria.

But it was Griezmann who made the greater impact. The Real Sociedad winger replaced Giroud in the 62nd minute and created a host of chances. Perhaps more significant was his impressive link-up play with Karim Benzema.

Giroud is arguably a more natural goal scorer in a central role but Griezmann provides something different with his pace and creativity.

While Deschamps ponders his attacking options, Germany coach Joachim Loew will have doubts about his midfield.

Having won their first match 4-0 against 10-man Portugal, Loew`s side has mostly failed to impress. A 2-2 draw against Ghana was followed by a 1-0 defeat of the United States and Monday`s barely deserved 2-1 win over Algeria.

Mesut Ozil, Philipp Lahm, Tony Kroos and Mario Gotze, while having enjoyed some good moments, are yet to hit peak form in Brazil.

Ozil, in particular, looks to be restricted by Loew`s 4-3-3 formation, which has no place for the Arsenal midfielder`s preferred No. 10 position.

Loew will also be considering returning Sami Khedira to his starting line-up.

The Real Madrid midfielder missed Germany`s 1-0 victory over the United States and was a 70th-minute replacement for Shkodran Mustafi against Algeria.

His box-to-box running, metronomic distribution and willingness to defend might be just what Germany need to progress to the tournament`s last four.

On a bright note for Loew, Mats Hummels, who missed the Algeria match due to illness, is expected to be available Friday. Andre Schurrle could also be handed a starting berth after he came off the bench to score against the African team.