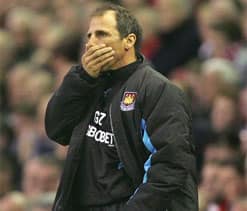 After losing in the Championship play-off final against Crystal Palace last season, former West Ham manager Zola had been unable to get Watford back on track this term and they are currently languishing in 13th place, eight points adrift of the play-off spots.

Watford had gone nine league games without a win and Zola hinted after Saturday`s loss that he was thinking about quitting.

The 47-year-old Italian decided he has taken the club as far as possible and writing in a statement on Watford`s website he said: "This decision has not been made quickly. I mentioned after the game on Saturday that I wanted to think about things overnight and that is exactly what I have done.

"I must place Watford Football Club first in my thoughts and it is for this reason that I have taken my action.

"I feel that it is in the best interests of the team that somebody new is given the chance to bring the success which we have all hoped for and worked very hard for.

"It is for a variety of reasons, and not just over one matter or one moment, that I feel this is the right decision for me, in the best interests of the club."

Watford, owned by the Italian Pozzo family, added in a statement: "It is with great sadness that the board of Watford has accepted the resignation of Gianfranco Zola.

"Watford FC wishes to place on record its sincere gratitude to Gianfranco for his achievements at Vicarage Road, and for always acting with the utmost dignity and grace.

"The Board fully respects his decision and Gianfranco will be welcome at Watford any time in the future."