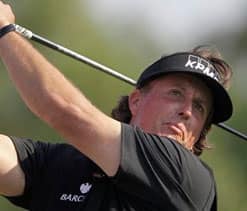 Phil Mickelson is fast approaching his mid-forties when many players begin winding down their careers but the five-time major champion says he still has a lot of unfinished business left at the game`s highest level.

Significant improvements in his putting and driving helped him enjoy a successful 2013 campaign and he makes his first PGA Tour start of the year at this week`s Farmers Insurance Open in San Diego feeling better about his golf than ever before.

"I am really excited for two reasons ... the two areas of my game that have not been as efficient as I would like in the last three or four years have turned into strengths," Mickelson told reporters at Torrey Pines on Wednesday.

"One of them is putting. I putted great last year and I had a remarkable turnaround.

"And the other is the driver. As we have done a complete reversal on the direction, technologically speaking, it has made a world of difference for me and my game. I`m more excited about this year than any year ever."

Mickelson, who clinched his fifth major title last year with a sensational three-shot victory in the British Open at Muirfield, said his driving had improved considerably due to technological improvements in the club.

"Having the center of gravity lower and more forward has allowed me to make the same golf swing as my irons and hit the drives and the shots that I want and that I expect," the left-hander explained.

"It`s just made driving a lot easier. I drove it the best I ever have Sunday in Abu Dhabi when I needed to hit fairways, I drove the ball great."

Mickelson, 43, tied for second at the European Tour`s Abu Dhabi Championship on Sunday, in his first tournament of the year, after closing with a 69.

Winning a U.S. Open title for the first time, to complete a career grand slam of the four majors, is a top priority for Mickelson and he is delighted this year`s edition will be held at Pinehurst, North Carolina, where he finished second in 1999.

"I`m excited that the tournament that I`ve played some of my best golf in is the one that I haven`t won and I feel like it`s just a matter of time," he said.

"It may be this year at Pinehurst, it may not, but I do believe that will come. It`s a tournament I`ve played too well in over the years not to finally win and I actually believe I`ll win a couple.

"I`m not putting it all on one week. I think Pinehurst would be a great fit for me in that the greens repel balls off and there`s very little rough which allows the short game to be a factor. It`s a big reason why I played so well in `99."

Mickelson has posted 10 top-10s at the U.S. Open, including a record six runner-up spots, most recently at Merion last year.

The San Diego native, who has won the Farmers Insurance Open three times, has been grouped with fellow American Bubba Watson and Australian Jason Day for the first two rounds at Torrey Pines.