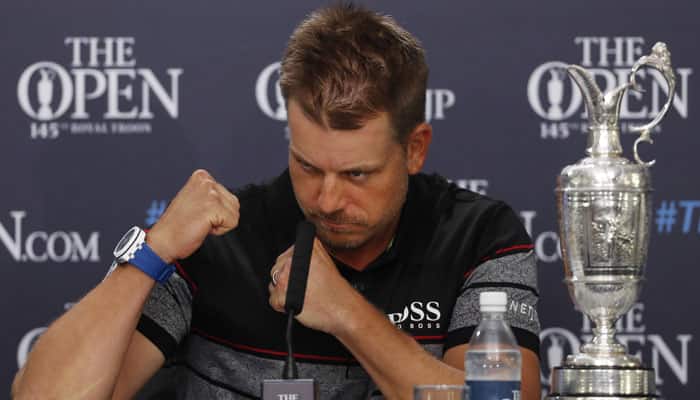 Scotland: Henrik Stenson held off the challenge of Phil Mickelson to win his first major at the British Open on a breathtaking final afternoon at Royal Troon on Sunday.

The Swede started the day one shot clear of Mickelson and recovered from a bogey at the first to produce a stunning major-championship record-equalling round of 63, eight under par.

His effort featured 10 birdies and took him to a 20-under total to finally win by a three-stroke margin with the lowest overall score in Open history.

On a surprisingly bright and calm afternoon on Scotland`s west coast, it was set up for a shoot-out between the two players and they did not disappoint.

Emphasising the gulf between them and the rest of the field was the fact that JB Holmes of the United States took third place with a six-under-par total for the weekend.

"This will take a while to sink in," said Stenson, at last a major winner at the age of 40, as he clutched the trophy.

"I`m very proud of the way I played. It was a great match with Phil. It seemed like it was going to be a two-horse race, and it was all the way to the end.

"I knew I had to keep on pushing, keep on giving myself birdie chances and he wasn`t going to give it to me, so I had to pull away."

He had previously endured seven top-four finishes in majors and was the runner-up to Mickelson in the British Open at Muirfield in 2013.

Coming into the day, the prospect of a two-way shoot-out for the Claret Jug evoked memories of the legendary `Duel in the Sun` down the Ayrshire coast at Turnberry in 1977, when Tom Watson edged out Jack Nicklaus after the two Americans had separated themselves from their rivals.

And the showdown between the two forty-somethings more than lived up to its billing as they produced an exhibition of world-class golf.

There was a wobble when he missed a par putt at the difficult 11th hole but remarkably he produced three straight birdies from the 14th to put the outcome beyond doubt.

The game was up for Mickelson when Stenson came up with a stunning long putt for birdie at the 15th to go two shots clear and leave his opponent with too much to do.

The final gap became three shots as Stenson holed out for birdie at the last to follow Mickelson`s feat in the first round on Thursday by shooting 63.

"I`m disappointed to come in second but I`m happy for Henrik."Stenson`s 20-under-par total of 264 was a record low score in The Open, beating Tiger Woods and his 19-under effort at St Andrews in 2000.

For Royal Troon, he obliterated the American Justin Leonard`s record 12-under winning total in 1997.

Stenson becomes the first Scandinavian man ever to win a major and the first player from continental Europe to lift the Claret Jug since the late, great Seve Ballesteros of Spain in 1988.

His victory prevented Mickelson from becoming the seventh straight American winner of an Open to be held at Troon. The 46-year-old Californian was also prevented the honour of becoming the oldest winner of the Claret Jug since Tom Morris Senior down the road at Prestwick way back in 1867.

Mickelson remains on five majors, despite having started his week with that remarkable 63 of his own.

On Thursday he was left cursing when a birdie putt at the 18th lipped out, denying him the first ever 62 in a major, and he was also agonisingly denied lifting the Claret Jug for the second time by Stenson`s brilliance.

McIlroy, the 2014 Open champion at Hoylake, finished the highest of that quartet after an impressive 67 on Sunday left him tied for fifth at four under par overall alongside England`s Tyrrell Hatton and Sergio Garcia of Spain.

Steve Stricker, another American, was fourth at five under par.