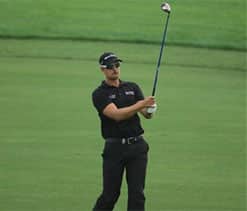 Stockholm: Henrik Stenson`s dramatic rise to number three in the world has led to a sudden surge in off-course demands and distractions that could damage his golf unless he is careful, the Swede said on Wednesday.

The former Ryder Cup player has rocketed up the rankings after a remarkable year during which he became the first man to win the U.S. Tour`s lucrative FedExCup series and finish top of the European money list.

"I must keep on working on my game and following up on a great season," Stenson told a news conference on the eve of the Nedbank Challenge in South Africa.

"There are a couple of traps and I think expectation is one of them. Another is handling my time - the demand for my time is probably five times as much now as it was six months ago.

"When you`re flavour of the month everyone wants a piece of you. It becomes quite hectic outside of golf and if you don`t get rest and practice it will show up in your game," said the 37-year-old Stenson.

"It will be key to look after those areas."

A win at the 2009 Players Championship in Florida took the Swede up to fourth in the world before he suffered the second big form slump of his career to crash out of the top 200.

Now that he has his mojo back, Stenson is looking to reach the twin peaks of winning a first major and taking over from Tiger Woods as world number one.

"I`ve pretty much achieved everything in the game that I want to except for winning a major," said the former Ryder Cup player at the Gary Player Country Club in Sun City.

"I`m looking at a good three, four, five years ahead of me if I can stay healthy to try and win one of the big ones.

"I would love to get to world number one. It`s definitely in reach if I continue with the form I`ve shown since the summer."

The Nedbank Challenge features an elite 30-man field competing for a prize fund of $6.5 million.