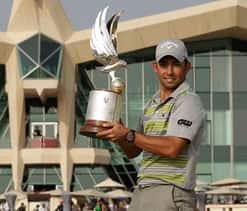 Abu Dhabi: Spain`s Pablo Larrazabal ended his title drought on the European Tour when he held off Phil Mickelson and Rory McIlroy to win the $2.7 million Abu Dhabi HSBC Golf Championship by one shot on Sunday.

At the Abu Dhabi Golf Club course, the 30-year-old from Barcelona shot a final-round 67 to finish on 14-under par 274, while world number five Mickelson (69) and number seven McIlroy (68) were tied second at 275.

While Larrazabal was solid throughout the day barring a bogey on the fifth hole, the tournament turned around massively in his favour when Mickelson made a mess of the 13th hole, where he hit the ball twice trying to come out from under a bush playing a right-handed shot.

Mickelson ended up with a triple bogey and from leading the tournament at 13-under par he dropped down the leaderboard, and even three birdies after that could not help him overtake Larrazabal.

McIlroy was left ruing the two-shot penalty that was imposed on him for not taking full relief from a spectators` crossway in the third round Saturday.

South African George Coetzee (66) and Spain`s Rafael Cabrera-Bello (68) were tied for fourth place at 12-under par 276.

Larrazabal said: "It just feels unbelievable. I`ve been working so hard for the last two years and this winter. They always say that the hard work pays off, but it`s hard to believe it.

"Today has been very special, to fight against Rory and Phil, top? 5 players in the world, both of them. It`s been a great fight.

"I don`t know what it does to my career. I don`t know if this gets me into any of the Majors. I just want to go back to the hotel, celebrate, and think about everything else tomorrow."

A disappointed McIlroy, who could not get a birdie despite some great chances between the 11th and 17th holes, said: "I feel like I`m standing here and I should be 15?-under par for the tournament and win by one. But that`s the way it goes.

"I played the least shots of anyone this week. So, I mean, I can count it as a moral victory more than anything else.

"It`s frustrating. I`ve played well the whole week. It`s a very positive start to the season so I`m not going to let one little negative ruin that."

Mickelson also looked at the positives of starting the season well.

"I ended up going with a 3-?wood off that tee and just blocked it in a terrible spot. I tried to right hand it out and I double-hit it. I don`t know how, but it happened," said the American.

"I fought hard to make a few birdies coming in. It was just that one swing, because I really struck it well today.

"Hit a lot of good shots, drove the ball well and it was that one tee shot with that 3?wood that did me in. But I am happy with the way I played and felt better with my swing each day."

For Larrazabal this was his third European Tour title, his previous wins coming in 2008 and 2011.