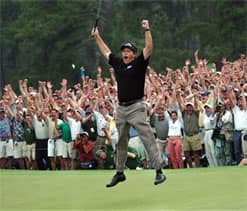 The first event of the tour`s annual Middle East swing, which also includes the Qatar Masters and Dubai Desert Classic, starts on Thursday and features Mickelson and three other golfers from the world`s top 10 - Henrik Stenson, Rory McIlroy and Sergio Garcia.

American left-hander Mickelson, ranked fifth in the world, will be making his second appearance in Abu Dhabi having tied for 37th place in 2011.

"It was a great win last year," Donaldson told the tour website (www.europeantour.com). "Going back anywhere that you`ve played and won before is really good."

World number three Stenson will be the highest-ranked player in this week`s field.

Northern Irishman McIlroy, ranked seventh, has only been outside the top-11 once in six previous appearances but the player with the best record in Abu Dhabi is Ryder Cup hero Martin Kaymer.