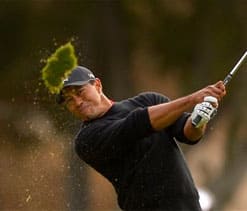 Los Angeles: Like an enticing chocolate box offering an exquisite array of pralines, truffles, fudge and liqueurs, global golf gave its fans just about everything they might have wanted during a riveting and unpredictable 2013.

The quality and variety of golfing `confectionary` was exceptional and, with Tiger Woods`s remarkable dominance in the late 1990s and early 2000s now a fading memory, confirmed that the sport`s strength in depth has never been better.

Adam Scott ended decades of Australian heartache with his country`s first U.S. Masters victory and left-hander Phil Mickelson pulled off a sensational triumph at the British Open, the one major that had always seemed the unlikeliest for him to win.

England`s Justin Rose finally lived up to the lofty expectations long heaped upon his shoulders by clinching the U.S. Open and `ordinary looking` Jason Dufner, known for his ultra-laidback demeanour and pre-shot waggle, struck a chord with club players everywhere by winning the U.S. PGA Championship.

American Jim Furyk became only the sixth player to shoot a 59 on the PGA Tour (at the BMW Championship) and Swede Henrik Stenson ended a brilliant year as the first man to land both the European Tour`s Race To Dubai title and FedExCup playoff honours in the United States.

World number one Woods failed to add to his major tally of 14, despite being in the mix at both the Masters and British Open, but he triumphed a season-high five times on the PGA Tour before being voted Player of the Year for a record 11th time.

Rory McIlroy, his heir apparent as the game`s leading player, ended a turbulent 2013 campaign on and off the course with victory at the Australian Open and will now aim to build on that as he attempts to regain his brilliant 2012 form.

McIlroy, who had won two majors by the age of 24 but then struggled after changing his equipment manufacturer in January and having to cope with legal distractions, knows as well as anyone how strong competition has become at the highest level.

"You`ve got to play really well to win now," the Northern Irishman said. "That`s why you see so many first-time winners because the fields are so deep. It is tough to win out here."

Underlining the strength in depth is the fact that 19 different players have combined to win the last 21 major championships.

Scott put his name on that list in April with a high-quality playoff victory over Argentina`s Angel Cabrera at the Masters, sealing his win in rain-soaked conditions with a 15-foot birdie putt on the second extra hole.

"Australia is a proud sporting nation and this is one notch in the belt that we never got," said Scott who ended the year as world number two after narrowly missing out on a rare Australian `triple crown` following wins in November at his national PGA and Masters.

"It`s amazing that it came down to me," he added, referring to his Masters victory.

In June, Rose produced remarkable poise and a Ben Hogan-like finish to claim his first major title by two shots at the U.S. Open after overhauling 54-hole leader Mickelson in the final round.

Rose closed with a level-par 70 in difficult scoring conditions at Merion Golf Club, posting a one-over total of 281 to become the first Englishman to win the year`s second major since Tony Jacklin at Hazeltine in 1970.

"I established a game plan that really held true for me," said Rose. "It`s been a perfect week, start to finish."

One month later 43-year-old Mickelson produced one of the greatest ever closing rounds at a major, firing a five-under-par 66 in cool and breezy conditions to win the British Open at Muirfield by three shots.

"To play probably the best round of my career is probably the most fulfilling moment of my career because it is something I thought I would never do here (at a British Open)," an emotional Mickelson said after landing his fifth major title.

The following month Dufner added his name to the growing number of first-time major winners, clinching a two-shot victory in the PGA Championship at Oak Hill Country Club after closing with a two-under 68.

"I can`t believe this is happening to me," Dufner said after being presented with the coveted Wanamaker Trophy. "It`s a big step for my career."

Woods described his 2013 campaign as "fantastic", even though he has come up empty-handed in the four majors since his remarkable playoff victory in the 2008 U.S. Open at Torrey Pines.

"I feel like I`ve improved this year more than I did over the previous year," the 14-times major champion told Reuters. "I think it was a fantastic year, unfortunately I didn`t win a major championship.

"I was close at the Masters (tied for fourth) and the British (Open where he shared sixth place). A couple of little swings here and there and it might have been a different story.

"But I won the Players (Championship) at a venue (Sawgrass) where I have struggled over the years ... to win five times and get Player of the Year again, that feels pretty good."

Though Woods ended the year winless in the majors, perhaps the most surprising aspect of his season was that he was three times given two-shot penalties for rules violations (at the Abu Dhabi Championship, Masters and BMW Championship in Chicago).

Stenson capped a magnificent year with a six-shot victory at the DP World Tour Championship in Dubai to top the European Tour order of merit and 21-year-old Hideki Matsuyama became the first rookie to claim the Japanese Tour`s money title after winning five times in 2013.

South Korea`s Inbee Park set pulses racing as she won the first three women`s majors of the year, cruising to a four-shot victory at the Kraft Nabisco Championship, pipping Scotland`s Catriona Matthew in a playoff for the LPGA Championship and clinching the U.S. Women`s Open by four strokes.

However her stirring run of consecutive major victories ended at the Women`s British Open in August when American Stacy Lewis came from behind to triumph by two shots. Park, never in contention, tied for 42nd place.

China golf has `woken up` with Nissan Cup win