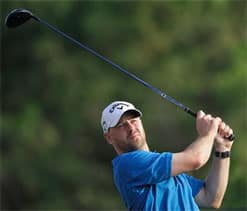 Dubai: Little-known Briton Craig Lee withstood a barnstorming display from world number five Phil Mickelson to grab a two-stroke lead after the third round of the $2.7 million Abu Dhabi Championship on Saturday.

Lee, 36, who had shared the overnight lead with Spaniard Rafael Cabrera-Bello, lifted his hopes of scooping the first European Tour victory of his career by firing a three-under-par 69 for a 12-under total of 204.

Mickelson surged into contention, a dazzling 63 taking him into a tie for second place on 206 along with India`s Gaganjeet Bhullar (66).

A further stroke adrift were world number seven Rory McIlroy (70), who was scuppered by a two-shot penalty, and Spain`s Pablo Larrazabal (68).

Early starter Mickelson charged through the field with a dynamic round containing nine birdies, one eagle and two dropped shots.

The five-times major winner conjured up a four at the par-five 18th after finding a bunker off the tee and sandy waste with his second shot.

With a palm tree in front of him, the 43-year-old Californian produced a low, fading escape with his third effort that scuttled up on to the green and he fist-pumped the air in delight when he rolled in his putt from 30 feet for his closing birdie.

"It probably wasn`t very sensible of me to try to go for the green but hey, that`s what I do," Mickelson told reporters.

"I was fortunate in that I just had enough room to trap out a low pitching wedge that flew under the leaves and up on to the green.

"Bones (caddie Jim Mackay) did not like the decision and I don`t blame him. It probably wasn`t my smartest play," added Mickelson.

Lee will play alongside the left-hander in the final group on Sunday and said he would take heart from unheralded Welshman Jamie Donaldson`s victory in Abu Dhabi 12 months ago.

"You can look back on that and say fairytales do happen," said the Scotsman. "I just have to go out and play the best I can.

Northern Irishman McIlroy incurred a two-stroke penalty after breaching the rules while taking a drop at the second, turning his par-five at the hole into a double-bogey seven.

"I guess I just have to try to make up those shots as early as possible tomorrow and try to get off to a fast start," he said.

"I felt like I hung in there well and had a lot of opportunities on the back nine that I didn`t take. It was nice to birdie 18 but it was all sort of in vain."