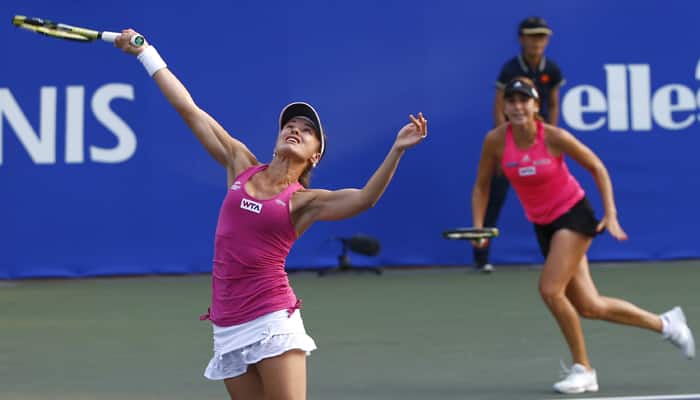 Former world number one Martina Hingis and rising star Belinda Bencic made their debut as a dream doubles team for Switzerland Tuesday, winning their first match together at the Pan Pacific Open.

Four-time Grand Slam singles champion Hingis, 33, and 17-year-old Bencic, who reached the US Open quarter-finals two weeks ago, combined to oust Rika Fujiwara of Japan and Taiwan`s Hsieh Shu-Ying 6-4, 6-2 in the first round.

The all-Swiss pairing was announced as a wild card only last week after Hingis`s usual partner Flavia Pennetta of Italy pulled out of the $1 million tournament with a right-foot injury.

With Pennetta, Hingis reached the US Open final but her bid for a 10th major doubles title was denied by the Russian pairing of Ekaterina Makarova and Elena Vesnina.

Hingis, whose mother Melanie Molitor has trained Bencic for 10 years along with the youngster`s father Ivan, said she was committed to play with Pennetta at least until the end of this year. But a regular pairing with Bencic may be possible in the future.

"We`ll see. Maybe in the future there will be other opportunities for us to do this and that will be great," Hingis said.

The second-round opponents for the Swiss duo will be either the top-seeded pair of Zimbabwe`s Cara Black and Indian Sania Mirza or unseeded Casey Dellacqua of Australia and American Lisa Raymond.

"We had to figure out each other and what our strengths and weaknesses are and how to win matches," Hingis said of the first set.

"I think we got better throughout the match today. We`re really proud of that. We have now next steps to take."

Bencic said, "In the beginning I didn`t play that good. Then I came more into the match and Martina was helping me good."

"There was no reason to be really nervous," said Bencic, who has known Hingis since she was only four years old.

There were moments of great doubles play by the Swiss.

On Hingis`s service, Bencic`s sharp passing shot landed inside a corner to put the team ahead 5-1 in the second set.

The top four seeds, including world number eight Angelique Kerber of Germany and eighth-ranked and US Open finalist Caroline Wozniacki of Denmark, took a bye into the second round.

Agnieszka Radwanska off the mark in Seoul title defence