F1`s contenders and pretenders after round five 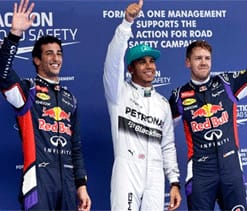 New Delhi: The 2014 Formula One season is only five races old but Mercedes have already gained more than hundred points than their nearest rivals in the Constructors` Championship.

In the Drivers` Championship, despite starting the season with a retirement in Albert Park, Lewis Hamilton has reached 100 points thanks to four straight wins. His Silver Arrow team-mate, Nico Rosberg is on 97 points, having finished second best in those four races. He did win the season opener in Melbourne, but has so far failed to match Hamilton. Hence many feel that the this season, the fight for individual honours will be between the two of them.

However, defending champion Sebastian Vettel seemed to have found answers to the difficulties that hampered his title defence. In Spain, Vettel set the fastest lap of the race, besides finishing fourth starting from 15th. For the prodigious German, the season so far has been a difficult one. The four-time back-to-back champion saw his understudy, Daniel Ricciardo outperforming him in the previous races. After the round five, he now leads Ricciardo by six points thanks to the Australian`s disqualification in Melbourne.

Ahead of the Red Bull duo in the standings is Fernando Alonso, on 49 points. Despite being the biggest and richest outfit in the sport, Ferrari have struggled to maintain their dominance since the rise of Red Bull. And it seems, the Italian outfit will need some time to turn the table as another team, Mercedes have just started their push.

At the start of the season, much was expected from Ferrari. They have even brought back their former world champion Kimi Raikkonen, but their fortunes have not improved. The Finn is now languishing at 11th, having accumulated 17 points so far. Coupled with the complex changes brought about in the sport in 2014, Ferrari`s in-house issues have compromised their season.