Mercedes said a transmission problem was to blame. 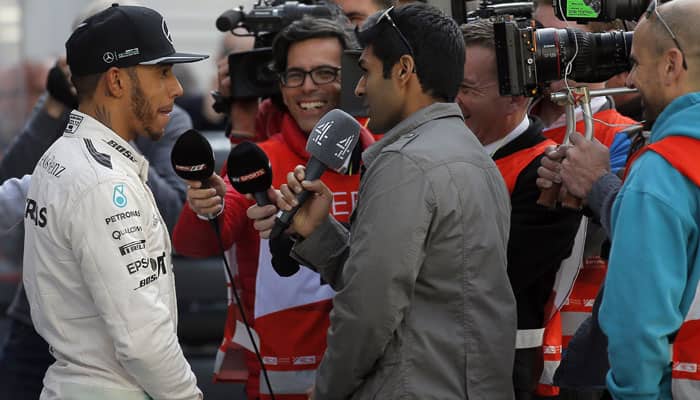 Lewis Hamilton`s Mercedes suffered a rare mechanical failure on Friday as Formula One teams wrapped up pre-season testing in Barcelona with Ferrari back on top of the timesheets.

"I`m kind of glad I broke the car at the end of my final run today because it`s better to have found something now than in Melbourne," said the triple world champion, who completed 69 laps in the morning.

Mercedes, whose cars have pounded out 1,294 laps of the Circuit de Catalunya, said a transmission problem was to blame.

The sport`s dominant team have otherwise enjoyed relentless reliability over the eight days of testing with Hamilton and German team mate Nico Rosberg completing the equivalent of nearly 20 race distances at the Spanish Grand Prix circuit.

They have not appeared too concerned with putting down fast laps, however, leaving considerable speculation about just how much they might have in reserve when the bluffing stops in Melbourne on March 20.

Rosberg, winner of the last three races of 2015 from pole position, suggested Ferrari might have closed the gap -- although his comments might all have been part of the pre-season mind games.

"They have been very quick for sure," said the German. "We know more or less where we are compared to Ferrari, which is why I say for sure it is close. But we are not sure if we are ahead or behind."

Teams are not subject to scrutiny in testing sessions and run light or heavy on fuel, depending on their development programs, as well as using different tyre compounds.

"It has gone really well for sure," added Rosberg. "Of course the most important thing is the speed, which we are not 100 percent sure of."

"We have to see if this car can be a winner, but I think that the first impression was good and everything we have built is positive. So, overall, I am happy with the feeling in the car," said Vettel.

"In terms of reliability, though, Mercedes seems to be very strong, irrespective of the issue they had today," added the Ferrari driver, who tried out a new `halo` head-protection device on his cockpit.

The top Mercedes-engined car was Brazilian Felipe Massa`s Williams in third, ahead of Mexican Sergio Perez`s Force India and Hamilton in fifth.

Rosberg ended the day with the slowest time, but used the medium tyres while others were on faster softs and super-softs, and said the car had felt probably better than at any time in testing.