A-Rod vows to fight on after 2014 season doping ban 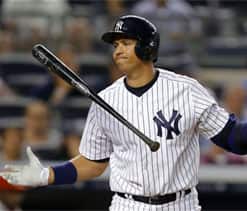 New York: Alex Rodriguez, the highest-paid player in Major League Baseball, was given a record 162-game doping suspension by an arbitrator on Saturday, banning him for the entire 2014 season and playoffs.

The New York Yankees third baseman, a three-time American League Most Valuable Player who helped the Yankees win the 2009 World Series, vowed to appeal the ban to a US federal court.

Independent arbitrator Fredric Horowitz upheld most of the 211-game ban imposed upon Rodriguez last August for his role in the Biogenesis doping scandal, which led to bans for 12 other players.

Rodriguez, who was given a harsher ban after evidence showed he tried to impede a probe into the matter, will fight despite the players` union and Major League Baseball saying the arbitration decision was the final word on the matter under the terms of their labor deal.

"I have been clear that I did not use performance enhancing substances or violate the basic agreement or the joint drug agreement in any manner and in order to prove it I will take this fight to federal court," Rodriguez said.

Rodriguez played the final weeks of the 2013 season while appealing the ban, even setting a major league record for career grand slams with his 24th bases-loaded homer last September.

Despite the reduction in total games missed, the suspension remains the longest in the history of Major League Baseball for doping and "A-Rod" remains the highest-profile baseball player ever banned.

Rodriguez, whose 654 career homers are 108 shy of Barry Bonds` all-time record, will lose $25 million in salary from the Yankees this year, or about $154,000 for every game missed.

Rodriguez, who in 2009 admitted that he had taken steroids while playing for the Texas Rangers from 2001 to 2003, would be 39 when he returns to play for Major League Baseball in 2015.

The Yankees could still owe Rodriguez $61 million from 2015-2017 under terms of his contract, although that could be headed for a court fight as well.

"I am confident that when a federal judge reviews the entirety of the record... and the lack of credible evidence put forth by MLB that the judge will find that the panel blatantly disregarded the law and facts and will overturn the suspension," Rodriguez said.

Major League Baseball defended the process and its original ban in a statement.

"For more than five decades, the arbitration process under the basic agreement has been a fair and effective mechanism for resolving disputes and protecting player rights," the league said.

"While we believe the original 211-game suspension was appropriate, we respect the decision and will focus on our continuing efforts on eliminating performance-enhancing substances from our game."

While the ban would preclude Rodriguez from playing for the Yankees this year, it does not explicitly deny him from being able to attend the Yankees` pre-season training camp next month in Tampa, Florida.

"I will continue to work hard to get back on the field and help the Yankees achieve the ultimate goal of winning another championship," Rodriguez said.

Evidence gathered in a probe of the now-closed Biogenesis anti-aging clinic in Florida led to a record number of suspensions from a single incident.

Rodriguez said he has been unfairly targeted as a first step for club owners to abolish guaranteed contracts and impose life bans for doping in the next contract with the players union.

"The number of games sadly comes as no surprise as the deck has been stacked against me from day one," Rodriguez said. "This is one man`s decision, that was not put before a fair and impartial jury, does not involve me having failed a single drug test... and relies on testimony and documents that would never have been allowed in any court in the United States because they are false and wholly unreliable.

"No player should have to go through what I have been dealing with and I am exhausting all options to ensure not only that I get justice, but that players` contracts and rights are protected through the next round of bargaining."

The Major League Baseball Players Association (MLBPA) said it disagreed with the arbitrator`s ruling but saw it as final.

"We recognize that a final and binding decision has been reached," the statement said. "And we respect the collectively bargained arbitration process which led to the decision."

Rodriguez walked out of an arbitration hearing last November, calling the process a farce in part because Major League Baseball commissioner Bud Selig was not required to testify.