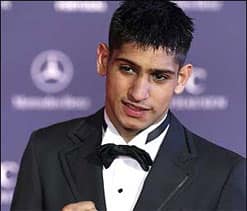 London: British professional boxer Amir Khan has reportedly told America`s Floyd Mayweather that he will never be a global star unless he fights him.

Khan said that if Mayweather wants to be a global star, especially the lucrative Asian market with areas like Dubai UAE, Pakistan and India, then he has fight him.

According to the Mirror, Khan, who revealed that he would face Luis Collazo on May 3, said that Mayweather had phoned him to promise that they will fight after he beats Marcos Maidana .

Khan, the former WBA and IBF light-welterweight champion, said that Mayweather called him up just after the Maidana fight was announced and said that the fight did not happen, but not to be disappointed as it is meant to happen this time.

Khan also said that India has a population, which is over a billion, Pakistan has 300 million people and so if Mayweather wants to target these areas, he has to fight someone who is known in these areas, the report added.

Steenkamp was happy with Pistorius `only 90 percent of the time`