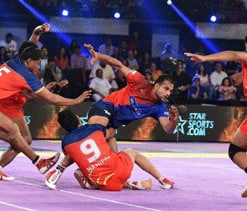 New Delhi: With four matches to be played on home turf, Dabang Delhi will look to clinch full 20 points and book a berth in the knockout stage of the inaugural Star Sports Pro Kabaddi League, commencing at the Thyagraj Stadium here from Sunday.

The Jasmer Singh-led side currently occupies the fifth spot in the points table in the eight-team event, with a win and two losses. They are hoping to win their next four matches at home before hitting the road again.

Although Delhi lost two of their three matches so far, both coach Arjun Singh and captain Jasmer said that the team had worked on its concerned areas and is now set to put its best foot forward.

"The team has been growing in confidence and could have pulled off the last match against Kolkata on their home turf. Now the crowd will be supporting us and that will definitely spur us to perform at our best," said Jasmer.

"We would be playing at home conditions and have full support of the fans, which would definitely add to our advantage. In a way, you can say that we would be starting the tournament afresh and give our best to make our fans proud of the team," he added.

The coach said he has pointed out the areas where his players were lacking.

"My team has a lot of talented players and I am not facing problems training them. We have been working hard on our grey areas and now I am confident of my team doing well in the matches to come," said Arjun Singh.

The owner of Delhi team, Radha Kapoor said, "The popularity of kabaddi makes Delhi one of the most important venues in the inaugural edition of the league. I am sure the support we will get here will provide us that extra edge, which can be crucial in such a competitive sport."

Kapoor, who said she herself was a kabaddi player, said she was keen on starting a kabaddi league for women also.

"My initiative is to start something for women also. They have also been playing well. And this is not a male dominated sport. So that is also something on my radar," she said.