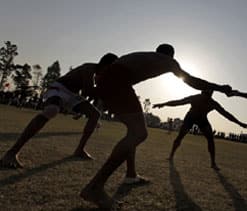 Bathinda: The fourth edition of World Cup Kabaddi tournament, in which 20 teams including eight women’s are taking part, got off to a glittering start here Saturday night.

Addressing the gathering, the chief minister said that it was his dream to see Kabaddi included in the Olympics.

"There was a time when this game was played only in India and that too particularly in Punjab. However, it is a matter of great pride for us that this game is now equally popular in nations across the globe, a glaring example of which was the presence of a number of foreign teams in the tournament," he said.

The chief minister said it was also matter of great pride and satisfaction that a number of women teams were participating in this tournament.

In his address, deputy chief minister said that it was the duty of the state government to popularise this rural game in every nook and corner of the state.

He said that already due to the stupendous efforts of the state government the game has became famous even in those countries, which had not even heard about it.