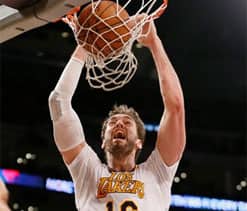 Los Angeles: Los Angeles Lakers star center Pau Gasol was diagnosed with vertigo on Monday, a day after leaving an NBA victory over Orlando at halftime due to dizziness and nausea.

The 33-year-old Spanish 7-footer (2.13m), the Lakers` top scorer and rebounder, was listed as doubtful by the club for Tuesday`s home game against New York but he will be re-examined on Tuesday morning.

That encounter will mark the first meeting between the Lakers and New York since former Lakers coach Phil Jackson took over as president of basketball operations for the Knicks earlier this month.

Gasol, a two-time NBA champion with the Lakers and two-time Olympic silver medalist with Spain behind a US collection of NBA stars, had an MRI scan on his head return normal readings after he spent the night in a hospital.

The Lakers, who beat Orlando 103-94 on Sunday despite losing Gasol for the entire second half, had also been without the Spaniard for seven games earlier this season with a groin strain.

"He was dizzy in the first half, went back in the dressing room, came back, finished the half," Lakers coach Mike D`Antoni said.

Gasol is averaging 17.5 points and 9.8 rebounds a game over 59 appearances for the Lakers, who at 23-46 own the second-worst record in the Western Conference and have been eliminated from playoff contention.