Grizzlies hold off Thunder to even playoff series 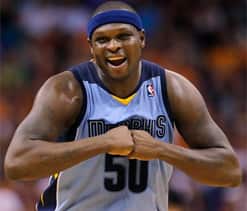 Oklahoma City: Zach Randolph scored eight of his 25 points in overtime to spark the Memphis Grizzlies over Oklahoma City 111-105 Monday, equalizing their NBA playoff series at one win each.

Mike Conley added 19 points and 12 assists while Spaniard Marc Gasol and Courtney Lee each added 16 points for Memphis, which will host the next two games in the best-of-seven Western Conference first-round matchup Thursday and Saturday.

NBA regular-season scoring champion Kevin Durant netted 36 points and grabbed a game-high 13 rebounds but it was not enough to lift the Thunder past the Grizzlies, who ousted Oklahoma City in last year`s playoffs.

Russell Westbrook added 29 points and nine assists and Spaniard Serge Ibaka had 15 points and 10 rebounds for the Thunder.

Durant took a pass from Westbrook at the left corner of the court and, while being fouled and falling backwards out of bounds, lofted a 3-point basket and added a free throw to lift Oklahoma City within 98-97 with 13.8 seconds remaining in the fourth quarter.

Conley went 1-of-2 from the line for the second time in the dying seconds to boost Memphis` lead to 99-97.

Westbrook missed a 3-point attempt but the Thunder`s Kendrick Perkins grabbed the rebound and banked in a basket as time expired to level the score at 99-99 and force overtime.

Randolph hit two early baskets in overtime as Memphis took a four-point lead, but Durant answered with a 3-pointer and a later free throw to pull Oklahoma City level at 105-105.

Randolph hit a layup to put Memphis back on top and, after Ibaka was called for traveling, Westbrook was forced to foul Lee, who hit two free throws to put the Grizzlies ahead 109-105.

Memphis had led 87-81 late in the fourth quarter before Durant sank a 3-pointer and Westbrook followed with a fast break slam dunk to pull the Thunder within a single point.

Memphis answered on Mike Miller`s 3-pointer and three free throws by Conley, giving the Grizzlies a 98-93 edge in the dying seconds, setting up the Thunder comeback to force overtime.