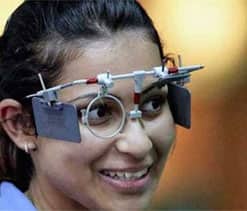 New Delhi: World number two air pistol shooter Heena Sidhu continued her impressive form as she clinched a silver medal at the ISSF World Cup in Fort Benning, USA, the feat taking her closer to the numero uno spot in her event.

The 24-year-old shooter from Ludhiana shot an impressive 386 with rounds of 98, 96, 96, 96. Heena shot a good 200.8 in the finals to clinch the silver. She now has the maximum medals in a World Cup by any Indian pistol shooter.

This was Heena`s third successive medal at the international stage, the first having come in the ISSF World Cup Final at Munich last November when she made the final world record followed by the Asian Airgun Championships in Kuwait last month. Heena shot 203.8 in Munich.

"This victory can take Heena to the World No. 1 spot. Presently she is ranked 2nd in the World," the National Rifle Association of India (NRAI) said in a statement.

In the same event at the USA Army marksmanship range, Malaika Goel, a 16-year-old young shooter, reached the finals and was ranked sixth. She was third in the qualification round with 385/400. She shot 119.4 in the finals.

London Olympics bronze medallist Gagan Narang missed the finals by 1.5 points in men`s air rifle, which brought him to sixth. His qualification score was 622.4.