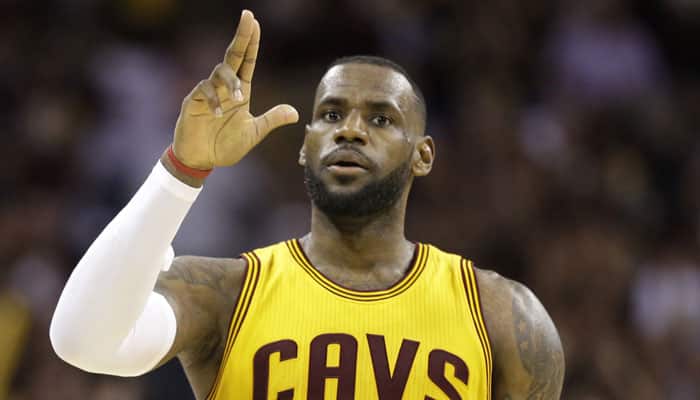 Several media reports citing unnamed sources say that James, the superstar playmaker who powered the Cavaliers into the NBA Finals, has told the team he will opt out of his contract, as Love also reportedly has done.

Situations often become murky because while clubs can start making offers to players on Wednesday, no deals can be signed until July 9, so confirmations often come long after deals begin settling out.

James is a free agent for the third time in five years after leaving Cleveland for Miami, spending four seasons with the Heat that brought two NBA titles and then opting last year to return to the Cavaliers.

This time, James is expected to re-join Cleveland after much talk about his devotion to his home region and his vow to turn the Cavaliers into champions and end Cleveland`s 51-year major sports title drought.

But opting out gives James leverage in making sure Cavs owner Dan Gilbert and management are as good as their word about spending on free agents to keep the team a title contender, including top-dollar efforts to sign Love, Tristan Thompson, Iman Shumpert, J.R. Smith and Australian guard Matthew Dellavedova.

And don`t expect this to be the last time James opts out of his contract. He is expected to sign with the Cavs again for $22 million, only a boost of $400,000 over what he would have made had he not opted out.

But next year, when a new television deal boosts the NBA salary cap, James could see his salary jump to $32.4 million by opting out. And the following year, when more of the TV money kicks in, opting out could boost James` paycheck to $40.7 million.

Beyond the Cavaliers, who fell to Golden State in the NBA Finals, come several talented free agents who could boost the fortunes of new clubs.

Aldridge is expected to leave Portland and the Los Angeles Lakers are among the teams that are likely to offer the forward a huge sum while Memphis center Marc Gasol could lure offers after the Spaniard produced a career-high 17.4 points a game last season.The Miami Heat could lose guard Dwyane Wade, who can opt of of his deal and test the market, but British forward Luol Deng picked up his contract option Monday and will remain with Miami for next season.

San Antonio`s Kawhi Leonard, the NBA Defensive Player of the Year, is expected to stay with the Spurs. Either Tim Duncan and Manu Ginobili could retire but if they return the Spurs again figure to be a factor in the title hunt.

Golden State figures to do what it can to keep forward Draymond Green, a key figure in the Warriors` title run, while Chicago`s Jimmy Butler, the NBA`s Most Improved Player last season, figures to command a strong salary offer. The Bulls can match it or watch him exit after a season where he led the league in minutes played with career-high averages of 20.0 points, 5.8 rebounds and 3.3 assists.