Ecstatic to be named for the Padma Bhushan award, India's most decorated wrestling coach Satpal Singh says the honour has motivated him to work harder and his aim now is to improve the country's medal tally in wrestling in the 2016 Rio Olympics. 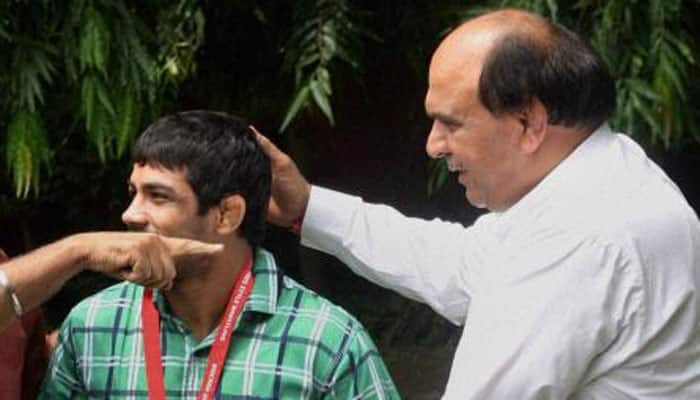 New Delhi: Ecstatic to be named for the Padma Bhushan award, India's most decorated wrestling coach Satpal Singh says the honour has motivated him to work harder and his aim now is to improve the country's medal tally in wrestling in the 2016 Rio Olympics.

Satpal, who was yesterday named for India's third highest civilian award, said he was preparing his pupils for at 3-4 medals in next year's quadrennial extravaganza.

"I am deeply honoured to be named for this award and it gives me an added motivation to work harder on my students, along with my team so that the Indian wrestlers can improve their medal's tally at the Rio Olympics," Satpal told PTI during an interview.

Yogeshwar Dutt finishing with a bronze in 60kg category. Associated with producing top wrestlers in the country, the 59-year-old wrestling coach, who was awarded the Padma Shri in 1983, said he was confident that one of his students would finish with at least a gold medal in Rio.

"I am sure one of our wrestlers can bag a gold medal in Rio," Satpal, who became the first wrestler to be named for Padma Bhushan, said. Conferred with the title of 'Mahabali' during his playing days, Satpal said while he was expecting nothing less than a gold medal from Sushil, he would want the likes of Amit Kumar and Bajrang, besides Yogeshwar, also to make it to the podium in Rio.

"I have got this award only because of my students, which includes names like Sushil, Yogeshwar, Amit, Bajrang and so many others and I would not leave any stone unturned in preparing them for podium finish in 2016 Olympic Games," Satpal, a 1982 Asian Games gold medallist and 1974 bronze medallist, said.

The coach, who is also the father-in-law of India's only double Olympic individual medallist, however, said he felt bad for Sushil after he was being ignored for the award.

"Had Sushil also got it, it would have been an icing on the cake. But Government has its own policy, so I don't want to go further into it," he steered clear of making any controversial statement.

The Wrestling Federation of India (WFI) had recommended Sushil's name to the Sports Ministry for Padma Bhushan, but when the final list was put up yesterday, the two-time Olympic medallist was not there.