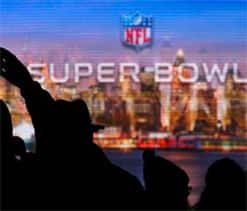 New York: What do the Muppets, Greek yogurt and Arnold Schwarzenegger have in common? They`re all starring in the most expensive four hours of American television ever.

This Sunday`s Super Bowl is not only America`s biggest sporting event -- it`s one of the biggest advertising pay checks on the planet, when a record $4 million buys 30 seconds of airtime.

The battle is on to capture the imagination, and the wallets, of 110 million Americans expected to watch the Denver Broncos take on the Seattle Seahawks in the National Football League championship.

Bigger in the United States than the Olympics, the Grammy Awards and the Oscars, the Super Bowl sees companies go head to head, battling ferociously to capture the market share.

More than 40 advertisers, from luxury cars to pistachios, have bought ads from 30 seconds to two minutes in what experts say is the most expensive advertising ever in US history.

In the age of Facebook, Twitter and YouTube, companies now preview their half-time ads with teasers designed to maximize online buzz as broadcasters Fox and the NFL eye record profits.

"This year is a lot about social media and so the game is transforming from a one-time event into a weeks-long social media extravaganza," Calkins told AFP.

Relative upstart SodaStream hogged the headlines by hiring sexy Hollywood star Scarlett Johansson to smolder in an ad banned by Fox for taking a swipe at rivals Coke and Pepsi.

SodaStream complained, but the ban -- and controversy about its factory in the Israeli-occupied West Bank -- turned the ad into an online phenomenon clocking up thousands of hits on YouTube.

Big hitters have gone for the clever or the farcical, releasing their ads in full or in "teaser" form, and even setting up "making of" websites to encourage people to share and comment.

Audi`s teaser features a couple who compromise on their choice of dog: crossing a Doberman with a Chihuahua to make a rampaging "Doberhuahua" guilty of mass mayhem.

It ends with the punch line, "Compromise scares us too."

Generating a huge buzz is Anheuser-Busch InBev, which has ads for Bud Light and Budweiser -- one starring Schwarzenegger dressed Bjorn Borg-style with blond hair warming up for table tennis.

Toyota has roped in the Muppets, Dannon`s Oikos yogurt is using a canoodling couple and there`s schmaltz in Unilever`s "Make Love, Not War" commercial for men`s deodorant Axe.

A mixed-race family that generated a racist backlash but was largely viewed favorably is back for Cheerios, and retired English footballer David Beckham will be selling H&M underwear.

Jaguar is making its Super Bowl debut with a sexy one-minute ad directed by Oscar-winner Tom Hooper and starring a trio of British actors as "British villains" led by Ben Kingsley.

"The teasers are meant to get people talking so that they are primed for paying attention during the telecast," said Matt Miller, president and CEO of the Association of Independent Commercial Producers.

"With the ad time on the rise and more tie-ins leveraging the half-time show and the NYC venue, Fox and the NFL are poised to make record profits on this game."

Stuart Schorr, a spokesman for Jaguar Land Rover North America, said the Super Bowl will kick off a $25 million advertising launch of the new F-TYPE coupe, which goes on sale in the spring.

In the first 24 hours after being posting online, the ad got 1.66 million viewers, he said, noting the whole point of the company`s campaign was to engage the audience on social media.

A few companies are still protecting the element of surprise -- among them Chrysler, which has traditionally enjoyed huge success in capturing the Super Bowl market.

"I think in the US, people like to see companies competing," said Calkins. "People love this advertising and people love to see what these companies are going to do."