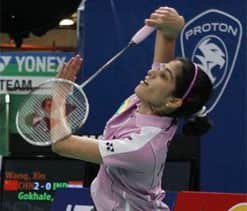 Sayali is getting married Dec 28 in Mumbai to her long time boyfriend and former shuttler Sagar Chopda. But for Sayali, badminton has taken precedence over her marriage preparations.

The Pune girl, who defeated World No.11 P.V. Sindhu last year to win the nationals in Srinagar, is determined to defend the crown at the Siri Fort Sports Complex here.

“I really wanted to play this tournament and defend my title. A lot of preparations are going on at my place as my relatives and friends are turning up everyday. I would have loved to be there but I am glad to play here,” Sayali, who is employed with Air India, told IANS.

Sayali said that both her and Sagar`s families have been supportive of her decision. Sagar was also a promising shuttler but a series of knee injuries ended his career early.

“Both the families supported me. And now that I am here, I don’t want to let it go and want to defend my title and go back as soon as possible so that I can have some fun in the 3-4 days before the marriage,” said Sayali.

Sindhu too pulls out of Korea Open