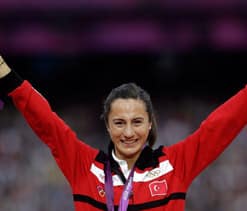 Back in April, Alptekin had been provisionally suspended by her Federation and charged with doping by the International Athletics Federation (IAAF) after anomalies were discovered in her biological passport.

"It has been decided that there is no grounds for national sporting sanctions against Asli Cakir Alptekin as she did not violate any anti-doping rules," said a statement from the disciplinary commission on the Turkish federation`s website.

"The disciplinary measures imposed on the athlete have been lifted."

Alptekin was a shock winner of the 1500m in London last year having earlier in 2012 shaved more than 5sec off her personal best.

The 28-year-old was previously handed a two-year doping suspension in 2004 and faced a lifetime ban if convicted this time around.

Alptekin`s compatriot and European 110m hurdles champion Nevin Yanit was also provisionally suspended in April and then handed a two-year ban in August, as one of 31 Turkish athletes hit with that punishment.

Alptekin, who was forced to miss the world championships in August because of her provisional supension, won the Olympic final ahead of compatriot Gamze Bulut, with Ethiopian-born Maryam Yusuf Jamal, who competes for Bahrain, third.