Before she became 2014 World Swimmer of the Year and the first to pass the $1 million mark in prize money, Hungarian Katinka Hosszu nearly hung up her goggles, frustrated that she failed to win a medal at the 2012 London Olympics. 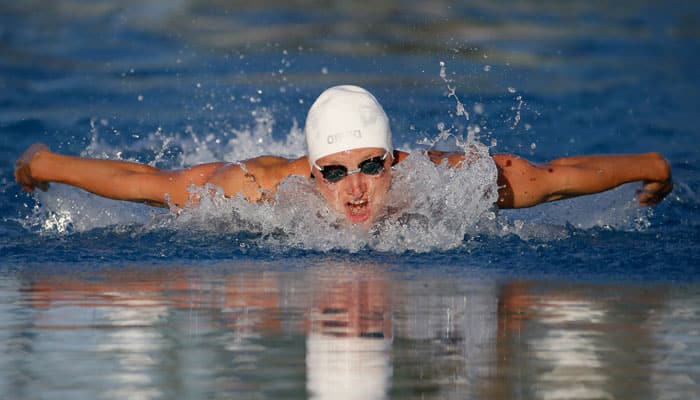 Budapest: Before she became 2014 World Swimmer of the Year and the first to pass the $1 million mark in prize money, Hungarian Katinka Hosszu nearly hung up her goggles, frustrated that she failed to win a medal at the 2012 London Olympics.

Instead, she adjusted her thinking and challenged the Olympics-focused training cycle traditionally followed by the sport`s top athletes. Olympic medals are no longer her ultimate goal, just one of several aspects to her schedule, she says.

As she prepared for the world championships, which are currently taking place in Kazan, Russia, she already had in mind the autumn World Cup series as well.

Although widely expected to dominate at Rio 2016, the Olympics is but a distant presence on her horizon.

The seven-stop World Cup series is her day job now. Last year she tried 14 events, collected a total of 51 gold medals in 10 different events and speeded to five short-course world records, towering above the field. She made about $400,000.

Her fellow swimmers are taking notice of her approach, which could help turn the sport into a lucrative business as the best athletes compete well into their thirties and deepen the field where a 26-year-old once counted as old.

Hosszu is 26 and nowhere near done. Other top talents like South Africa`s Chad Le Clos or the Netherlands` Inge Dekker, are also successful World Cup racers.

Hosszu, who has one blue and one brown eye to augment a playful smile, is happy to treat the sport like any other job.

"Of course I would love to have an Olympic medal," she told Reuters by the pool after a recent training session. "But it`s not something I obsess over... I don`t only look at 2016. I definitely want to keep swimming until 2020, maybe 2024."

She says she can do this because she can afford it. Most swimmers have retired while still in their twenties not because of physical limitations but because of financial ones, she said.

"What the sport hasn`t seen as much is someone looking at it as a profession," she said. "This is our job. Of course when I get prize money (at) competitions we look at that. Who doesn’t want to earn money from their profession?"

She is building her own Iron Lady brand with swimwear maker Arena, and has sponsorship deals as well, but prize money is her bread and butter.

"That was not something I got for being me," she said. "I perform and I swim for each dollar."
WATERSHED

Hosszu has looked at London as a watershed. Having acquired a psychology degree from the University of Southern California, she staked her future in swimming on her Olympic results. In the end, that singular pressure proved too much.

"London was not fun, neither for me nor for her," said her husband, the former American swimmer Shane Tusup, who doubles as Hosszu`s coach. "She wanted to quit after not winning a medal in London. I said why? You`re fourth. That`s still really cool."

"The Olympics... It`s just one competition. The fact that it happens every four years doesn`t make it more valuable, it just makes it less often swum."

Tusup says swimming should be like other professional sports, where the biggest names appear far more often, and insists that a gruelling professional schedule can coexist with preparations for an Olympics or a world championship.

"We`re trying to break that cycle of being an Olympic sport," he says. "It`s a huge task. (The global swimming body) FINA has struggled with it. They`ve got to have people to swim fast at the Olympics.

"We can swim fast in the season, you can make a lot of money by racing a lot, you can travel -- and make it fit in the programme. It`s not going to be simple but you can do it: show it is possible and still swim fast at the end of the season."

FINA has been balancing the annual World Cup with the biennial world championships and a four-year Olympic cycle.

"We do have a certain kind of fear that these interim races -- which are good morally and financially, enough to give a lifelong foundation for someone -- that they come back to hurt the participants. I always fear that, although I have always been proven wrong.

"If Katinka performs as well in Kazan as she did in Barcelona, that will vindicate her."

Hosszu won world championship golds for the 200m and the 400m medley, and a bronze at the 200m butterfly in Barcelona in 2013.