It is a little-known legal concept with a Latin name, and in the last 24 hours South Africans and millions more around the world glued to the Oscar Pistorius verdict have been feverishly trying to get their heads around it: `Dolus eventualis`. 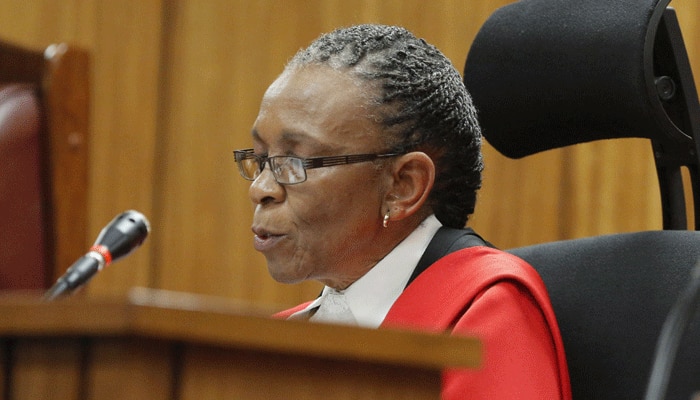 Johannesburg: It is a little-known legal concept with a Latin name, and in the last 24 hours South Africans and millions more around the world glued to the Oscar Pistorius verdict have been feverishly trying to get their heads around it: `Dolus eventualis`.

The state had accused the double-amputee Olympic and Paralympic track star of the cold-blooded murder of his model girlfriend, Reeva Steenkamp, on Valentine`s Day last year.

Pistorius - who was finally convicted of culpable homicide, or negligent killing - maintained it was a tragic accident, and that he had fired in the mistaken belief he was defending himself from an intruder lurking in the toilet cubicle.

In her verdict, Judge Thokozile Masipa said prosecutors had in fact failed to prove that the 27-year-old Pistorius had intended to kill the person behind the door, let alone Steenkamp, when he fired his four 9mm rounds.

Masipa`s rejection of premeditation was largely expected: there were only two witnesses to the shooting, one of whom was killed, leaving the state to rely on circumstantial evidence and the testimony of neighbours that Masipa rejected as conflicting and unreliable.

However, she also absolved Pistorius of a lesser charge of non-premeditated murder on grounds that the state had failed to prove intent or `dolus eventualis`, a legal concept that centres on a person being held responsible for the foreseeable consequences of their actions.

Many ordinary people were perplexed. And some legal experts thought she might have got it sufficiently wrong to give the prosecution a good chance if it decided to appeal on the point of law.

"Many of us believe she might have erred with regard to the ruling on non-premeditated murder, the whole issue of `dolus eventualis`," Cape Town criminal lawyer William Booth told South Africa`s ENCA television.

For one thing, there are South African legal precedents.

"We have many judgments which essentially say: `If you point a firearm at someone and shoot, then you intend to kill them`," said Steve Tuson, a law professor at Witwatersrand University.

And for another, elsewhere in her ruling Masipa conceded that "a reasonable person would have foreseen, if he fired shots at the door, the person inside the toilet might be struck and might die as a result".

Some experts suggested Masipa might have ruled out intent on the basis that Pistorius could not have believed specifically that he was shooting Steenkamp, with whose murder he was charged, rather than someone else.

"How could the accused reasonably have foreseen that the shots he fired would kill the deceased?" she asked.

"Clearly, he did not subjectively foresee this as a possibility, that he would kill the person behind the door, let alone the deceased, as he thought she was in the bedroom at the time."

But the working definition of `dolus eventualis` in South African courts, taken from the 1963 case of State vs. Malinga, suggests that the intent could apply equally with respect to the intruder who Pistorius says he thought was behind the door.

"In considering the issue of intention to kill, the test is whether the (accused) foresaw the possibility that the act in question ... would have fatal consequences, and was reckless whether death resulted or not," the State vs. Malinga ruling reads.

Sentencing for culpable homicide - which can still carry 15 years in jail - has been set for Oct. 13, and the state said it would not make any decision about an appeal until after that.

In the interim, expect many ordinary South Africans, transfixed by the six-month on-off trial of one of the biggest names in world athletics, to be brushing up their law.

"My friends don`t normally take any notice of Latin terms, but they`re curious about `dolus` because it`s been mentioned by the judge," said Nobesuthu Nyathi, a third-year law student at UNISA in Pretoria.

"The best thing is being asked about it by family members," said Gareth Heidt, a final-year law student in Johannesburg. "It`s not an easy thing to explain to people in layman`s terms, especially my mother."