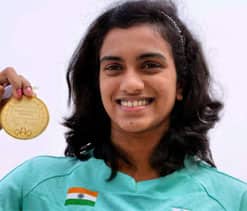 World No.7 Saina is the only seeded Indian at seventh and will open her women`s singles campaign against Kirsty Gilmour of Scotland in the first round of the Super Series Premier event.

The Hyderabadi is expected to ease past the World No.20 but could face a huge challenge in the second round against old foe Juliane Schenk of Germany. Though Saina has an 8-4 advantage over the German World No.11, Schenk won their previous meeting at the Indonesia Open in June 2013.

World Championship bronze medallist Sindhu also faces an equally tough draw at the 104th edition of the Championships as she starts against a Chinese. The World No.9 will take on World No.33 Sun Yu against whom the 18-year-old has a 2-1 win-loss record.

If the teenager manages to get past Sun, she will likely meet second seed and World No.2 Yihan Wang. Sindhu can take heart from the fact that she has beaten the Chinese Olympic silver medallist at the 2013 World Championships in her own backyard.

In the men`s singles competition, reigning national champion Kidambi Srikanth will take on Japan`s World No.15 Kento Momota in the first round. The Japanese has a 1-0 lead and Srikanth will be looking to level scores.

India`s leading male shuttler Parupalli Kashyap will face a tough challenge against Japanese World No.5 Kenichi Tago. World No.18 Kashyap is struggling for form and is probably also not physically fit as he partially dislocated his shoulder in December. Since then, the former national champion has been playing with a heavily strapped shoulder.