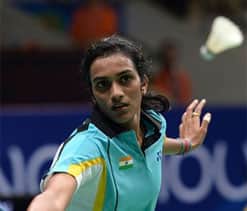 Singapore: While eighth seed P.V. Sindhu advanced to the women`s singles second round, compatriot Saina Nehwal yet again failed to perform to expected standards as the seventh seed suffered a first round loss at the $300,000 Singapore Open Super Series here Wednesday.

Old nemesis Eriko Hirose of Japan got past the Indian 16-21, 21-15, 21-11 in a marathon match which lasted an hour and two minutes at the Singapore Indoor Stadium. The World No.15 drubbed Saina the fourth time out of seven career meetings.

Meanwhile World Championship bronze medallist Sindhu beat Indonesia`s Millicent Wiranto 21-9, 19-21, 22-20 in 56 minutes to advance to the pre-quarters. The teenager will next take on Japan`s Shizuka Uchida for the first time to move into the quarters.

P.C.Thulasi also kept the Indian campaign alive as she edged past New Zealand`s Anna Rankin 21-13, 21-16 in 26 minutes to enter the second round. However, she next faces a tough task against Chinese World No.2 and second seed Yihan Wang.

Meanwhile in men`s singles, Kidambi Srikanth, B. Sai Praneeth and H.S. Prannoy all proceeded to the second round.

Srikanth took sweet revenge of last week`s India Open`s first round loss by ousting Japan`s Takuma Ueda 23-21, 21-15 in 47 minutes. With the win, their head-to-head is level at 1-1. Next Srikanth will face Vietnamese seventh seed Tien Minh Nguyen, who beat the Hyderabadi last year here in their only face-off yet.

However, Parupalli Kashyap suffered a heartbreak as he led South Korea`s Dong Keun Lee through most of the match but eventually went down in a one hour and 16 minute battle. Lee was down and almost but made a remarkable recovery to win 16-21, 21-15, 22-20.

Mumbai`s Anand Pawar also wasn`t so lucky as he went down to Indonesian Dionysius Hayom Rumbaka 10-21, 15-21 in 33 minutes.

Tarun Kona and Ashwini Ponnappa continued their dry run in mixed doubles as Singapore`s Danny Bawa Chrisnanta and Yu Yan Vanessa Neo beat the Indian combine in 28 minutes. The local pair won 21-15, 21-10 to advance to Round 2.

Later, Indonesian mixed doubles pair Gideon Markus Fernaldi and Rizki Amelia Pradipta overcame Arun Vishnu and Aparna Balan 23-21, 21-17 in 26 minutes. But Arun had his own share of luck as he and Alwin Francis overcame Chinese Taipei`s Jui Wei Liang and Kuan Hao Liao 21-15, 16-21, 22-20 in 50 minutes to enter Round 2 of men`s doubles