Sindhu can be better achiever than Saina: Malaysian legend 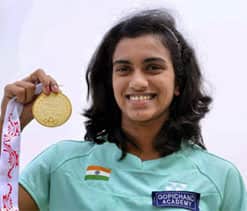 Razif, a 1992 Olympic bronze medallist in doubles, said Sindhu`s height and reach are an advantage for her and she should utilise those to the fullest.

"The future is very bright for Sindhu but I would tell her not to take anything for granted. If she works hard, Sindhu can be better than Saina because of her reach and height. Plus she has age on her side. Winning a world championship bronze at 18 was a very good achievement for Sindhu," Razif, one of six legendary Sidek brothers in Malaysian badminton, told a leading agency on the sidelines of the India Grand Prix Gold.

Razif, who is here with some of the players from his club, feels Saina didn`t perform well last year since she was not in the best frame of mind.

"Saina has not done well last year probably because she is not in a good state of mind. Sindhu is doing quite well; she should take this opportunity to grow. Her only threat is from the Chinese. The rest will not give her any problem but she should be focussed," added the 51-year-old, who also won the doubles silver at 1987 Beijing and 1989 Jakarta World Championships with brother Jalani.

The former two-time World Cup winner, is also impressed with the Indian singles shuttlers but expressed disappointment on the state of the doubles.

"Apart from Saina and Sindhu, I am happily surprised to see six talented Indians in the top-50 of men`s singles. They have good potential and hopefully they can become world beaters. But unfortunately, we don`t see any Indian doubles team at the top right now," added Razif, who also coached Malaysia to the 1996 Atlanta Olympics silver.

Razif said if India ignore doubles, they have to pay heavily in the Thomas and Uber Cups. The Thomas (Men) and Uber (Women) Cups are the sport`s most prestigious team events and will be held for the first time in New Delhi May 18-25.

"India are concentrating only on singles but don`t forget that Thomas and Uber Cups are going to be held in India, so you have to be more balanced. The Chinese are the best but I believe this Indian badminton team will not be bad if they have good doubles players," he said.

Asked for his comments on the women`s doubles pair of Jwala Gutta and Ashwini Ponnappa, a world championship bronze medallist, Razif said a lot depends on Jwala if the pair has to succeed.

"Jwala is a good player. She is experienced and Ashwini is young and talented. As a pair, they are quite strong but Jwala definitely has to work on her fitness. She is very skilful and has a lot of determination but if they want to go far and win tournaments, she has to be fit," said Razif.

Razif signed off by saying that when he and his five legendary brothers -- Misbun, Jalani, Rahman, Rashid and Shahrezan -- get together during festive occasions, they discuss anything but badminton.