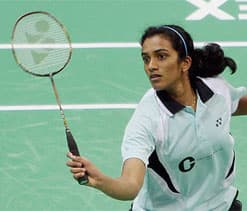 The World No.11 easily overcame a much lower ranked Qin Jinjing of China 21-13, 18-21, 21-19 in their first-ever encounter. Sindhu took an hour and eight minutes to win the semifinal and will take on World No. 30 and seventh seed Li Michelle of Canada for the first time in the title clash Sunday.

Sindhu, who won the Malaysia Open Grand Prix Gold in May, has a great chance to bag another Tier-III title before the season ends next month.

The 18-year-old`s overall game was much superior to her World No. 780 opponent, who could not stand against the World Championship bronze medal-winning opponent.

Sindhu had more number of smashes and net winners over the three games played.

In the first game, after almost being level at 13-12, the Hyderabadi just pulled away to grab eight more points to one by Qin.

Though the top seed led most of the time in the second game, the Chinese gave a much tougher fight and eventually snatched it at the end. Qin not only matched Sindhu when it came to winners with smashes, but also excelled at the net.

The third game was a neck-and-neck affair with the Indian just pulling through right in the end from 19-all.