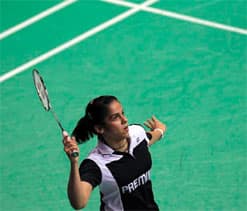 New Delhi: Top shuttlers including Lee Chong Wei, Saina Nehwal or P.V. Sindhu could miss part of the Indian Badminton League (IBL) which is coinciding with the $600,000 Denmark Open Super Series Premier to be held in Odense.

Last year the inaugural six-team league was held right after the World Championships from Aug 15-31 but this time the organisers are facing problems due to a crammed international calendar.

This year the World Championships (Aug 25-31) will be followed by the Commonwealth Games (July 21-Aug 4) and the Asian Games (Sep 19-29) pushing the IBL to October.

"The players have to take a call whether to stay or leave. It is a packed calendar and we had to look for the available dates. This was the window we could find. IBL is a domestic event so we were concentrating on the domestic calendar," Ashish Chadha, chief executive of Sporty Solutionz, IBL`s organiser and commercial partner, told IANS Wednesday.

Some top international shuttlers are likely to choose the high ranking event Badminton World Federation (BWF) event over the lucrative IBL while some even play the first part of the league. However, franchises can heave a sigh of relief as this year the number of players per side has been increased from 11 to 13.

A top BAI source told informed IANS Wednesday that Delhi Smashers` contract has been cancelled due to non-payment of dues, but Chadha rubbished the claim saying it will be a six-team league.

"This information is incorrect. We have a contract with Delhi Smashers and they will continue in IBL 2," said Chadha.

The chief executive also said that they are looking for an alternative city for IBL instead of New Delhi, due to administrative hassles they have to face while hosting the event at the Delhi Development Authority (DDA)-owned Siri Fort Sports Complex.